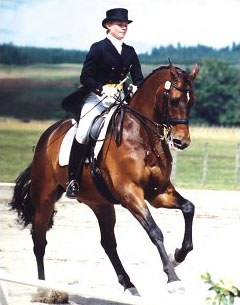 The 18-year old Amanda Goldsbury will be representing her country New Zealand at the 2006 FEI Young Riders World Cup Final held at the CDI-W Frankfurt in December. The 18-year old Goldsbury and her 16-year old horse Julius are currently based in Germany

preparing for this competition she has been dreaming about for over a year.

Goldsbury's horse Julius is a 175 cm standing bay gelding by the Seattle Lodge Stud Stallion, Jaguar out of the TB mare Sara Dane by Old Soldier.

The pair were first invited to compete in the inaugural Young Rider World Cup Final in Frankfurt in 2005 as a result of their winning the NZ Young Rider title, but difficulties arranging air transport for Julius saw the trip abandoned.

However, following her win at the NZ Young Rider Championships in January 2006, and her victory at the Lion Foundation CDIY at Palmerston North in September, Amanda and Julius achieved the two qualifying scores for a trip to Frankfurt and this time the dream is becoming a reality.

After a long haul flight from Auckland, taking more than 24hrs, the pair are currently based at stable Hufendiek in preparation for the event.

Amanda's younger sister, 14-year old Rebecca has recently won the NZ and Group IX Childrens section of the FEI World Dressage Challenge on Avante Garde, an attractive black gelding by Anamour from a Dynamit mare. At this young age, she also rides at Prix St Georges level on her bay gelding Glenturret, but is not yet old enough to challenge her sister in the CDIY competitions. In the next couple of years, though, one can be prepared for some intense family competition.