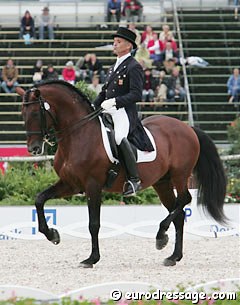 Guizo, one of Spain's most successful dressage horses ever, has passed away following severe acute intestinal problems. The bay Lusitano stallion spent the last four days of his life in the equine clinic where he was being treated, but unfortunately the veterinarians were unable to save him

and the horse passed away.

Guizo's passing is a great loss for the Spanish dressage world. The 18-year old stallion was owned by Enrique Guerrero.