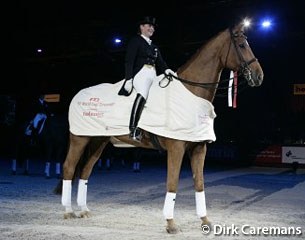 However I must say with a little help of Sjef Janssen”, Isabell Werth smiled, referring to the pregnancy of her nearest rival Anky van Grunsven.

Isabell Werth came to Maastricht showing Warum Nicht FRH, the 10-year old gelding owned by Madeleine Winter-Schulze. Warum Nicht FRH sustained an injury short before the WEG, which prevented him to earn the WEG-medals for its rider and for Germany. Maastricht was the very first outing again of the big Hanoverian bred chestnut, the runner up of the FEI World Cup™ Final in Amsterdam. “’Hannes’ went very well at home, but you never know before the show whether Hannes will be concentrated and doing its work in competition. Yesterday in Grand Prix he was with me already and today he did its utmost for the moment, staying with me and not getting tensed by all difficulties, which really made me very happy!”, Isabell concluded.

Her music with the tune ‘Land of hope and Glory’ needs to be renewed when he season continues, Isabell Werth promised. Her aims are to compete both in the fourth qualifier of the FEI World Cup™ in London showing Warum Nicht FRH and the fifth one in Frankfurt the same week showing Polano. “After that it will be a bit relaxation at home at Christmas, although I have my present already. We’ll do Mechelen and than we’ll see further”, the winner of two WEG-gold medals explained, before leaving in a hurry to Warendorf to the honorary celebration of the German FN of all medal winners in 2006.

However, the Dutch riders present did not give the win away. Dutch champion Imke Schellekens-Bartels who had a Grand Prix that lacked the nice contact, had one of her best Freestyle tests ever. Only in the ‘s-Hertogenbosch qualifier of the FEI World Cup™ the previous season, she had been rewarded with a higher score of 80%, now she received 79,50% for the runner up position. Third placed Edward Gal felt really very happy with the score of 77,15%. He had saddled the black elegant stallion G4S IPS Gribaldi who had not been competing internationally after the qualifier in Neumunster the previous season. “I am very happy that Gribaldi rose to the occasion here in Maastricht. After the sell of G4S Lingh to the USA, I am happy Gribaldi didn’t hesitate to take over the first position in my stables.”

The chairman of he judges Jan Peeters said he had been quite happy with the level of the performances and the agreement of the judges. Belgian rider Jeroen Devroe rose to the occasion in Maastricht as well as his score of 73,75% and he fifth position had been the highest of his life. German Ellen Schulten-Baumer rode a very equalized test with wonderful classical music in nice orchestral style. After her seventh place, she took over the lead in the standings of Wayne Channon, who’s score suffered from a lacking pirouette. By mistake he made the pirouettes twice on the same hand.

The next FEI World Cup ™ qualifier will take place in Stockholm (SWE) the forthcoming week.