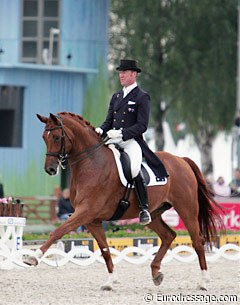 Australian record crowds saddled up to watch Australia’s elite equestrians thrill and entertain audiences. With the event hosting both a FEI World Cup™ Showjumping Qualifier as well as the Pacific League FEI World Cup™ Dressage Final, the stage was set for fierce competition.

Matthew Dowsley (AUS) riding Cinderella really did have a fairytale event winning the Pryde’s EasiFeed FEI World Cup™ Pacific League Dressage Final and the chance to represent Australia at the Final in Las Vegas next year!

The event marked the first competition appearance for Matthew Dowsley and Cinderella since their rather triumphal return from the FEI World Equestrian Games. Claudia and Francis Harper's Carbid mare, herself a former DWTS Young Horse Champion was expected to win and she did. Although Matthew “did not think she was at her best”, Cinderella was first with all five judges in the Grand Prix scoring 67.04%. Although most thought the competition a two way tussle between Cinderella and Kerry Mack's new Australian Grand Prix Champion, Whisper 1V ridden by Brett Parbery, it was Heath Ryan, straight from his Adelaide Four Star victory, who was the unanimous choice for second place riding Dr Margaret Evan's charismatic Rubenstein stallion, Regardez Moi with 64.66%. It is difficult for these young stallions at the beginning of their (Grand Prix) career to be as consistent as the more established competitors and neither Ryan not Parbery “are riding for second place”. Whisper was placed from sixth to third to rest in third place with 62.25%.

The Grand Prix Kúr to determine who would get to be leaving for Las Vegas was not such a straight forward judging affair and thought to be a very close competition between Cinderella and Whisper 1V. Cinderella was again not at her best, but her degree of difficulty got her across the line just over one percentage point ahead with 68.65%. Both international judges, Mariette Withages at C and Uwe Spenlen at B had Cinderella first. The same judges had Whisper (second with 67.60%) respectively fourth and third and both had Regardez Moi second. That Heath and Regardez Moi finished in fourth place (65.05%) was due primarily to the sixth and seventh handed out by the Australian judeges. Paula Price and her APH True Seville again produced a really crowd-pleasing test to take third place with 65.40%. With Matthew and the Harpers keen to take the mare to the FEI World Cup™ Final next April, it looks as if Cinderella will be earning some more frequent flyer points with her eye on yet another ball.