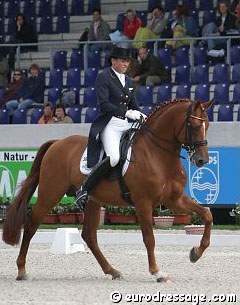 The rising 10-year old licensed stallion Richard Löwenherz has been sold to the Hahn family. Daughter Friederike Hahn is making the move from FEI dressage ponies to Junior/Young rider level

and Richard Löwenherz will be her new equine partner.

The chestnut Oldenburg stallion Richard Löwenherz is by Rubinstein out of Kunigunde (by Intervall x Parabol) and was previously owned by Gestut Tannenhof. Anja Plönzke competed the chestnut at the Bundeschampionate and later moved him on to small tour level. They were successful in the 2004 Nurnberger Burgpokal Finals in which they finished fourth and the pair competed at the CDIO Aachen.

Friederike Hahn, who lives in Tangstedt, Germany, had an impressive pony career on Danny Boy B. They finished 9th at the 2006 German Pony Dressage Championships. They were the individual winners at the international pony show in Willands, Sweden and they also won the 2005 CDI-P Kreuth. Danny Boy B placed third in the 6-year old finals at the 2003 Bundeschampionate.