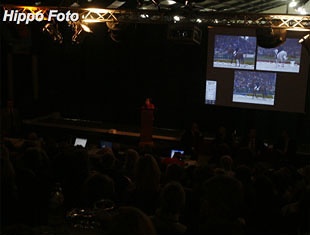 The forum continued with Mariette Withages’ review of the 2006 World Equestrian Games, in which she discussed the scores of three Grand Prix Special tests. Withages had set up her review well, giving the audience score sheets and the opportunity to judge the rides

of the Mexican Bernadette Pujals, the Danish Andreas Helgstrand and the German Isabell Werth. Withages chose these riders because they were three combinations that performed beyond expectation. Each movement and its score were publicly discussed and the audience got the opportunity to voice their opinion on why it did not agree with the judges’ marks. Matine’s mediocre trot work, swooshing tail and hardness in the mouth as well as Satchmo going behind the vertical and not pushing enough from behind were movements the audience considered overscored by the judges.

At the beginning of the review, Withages stated that for the first time “the press had no complaints about the judging”. Journalist Astrid Appels of Eurodressage.com contested this statement by referring to the inflated score of 71.417% that Debbie McDonald got for her Grand Prix ride on her unsound mare Brentina. The panel of judges at the forum was stunned by this outspoken comment and one could hear a pin drop in the room. 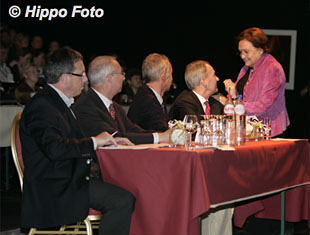 Judge Stephen Clarke had to defend the judge’s view on the test from memory and sophisticatedly stated that the mare was only “slightly irregular” and was scored down in the extended trot. The running score board at Aachen did however show 7s for her irregular extended trot and more irregularities were seen, for instance, in the half passes and passage. Though Clarke gave a very diplomatic reply trying to refute Appels’ viewpoint, no judge at the forum was able to provide a decent explanation for Brentina’s floated score. The American delegation of spectators and journalists at the forum did not agree with the journalist’s standpoint, but international riders such as Kyra Kyrklund and Anky van Grunsven applauded her comment.

Unfortunately because the program was running late, the controversial debate between the press and the judges had to be cut short for the lunch break. It was a great pity that the judges did not stand up and show the footage of Brentina’s Grand Prix after the break. The valid point, that some horses are judged based on reputation due to previous more successful performances, got diplomatically dismissed. The subject is too important for the future of international dressage and it should be integrated as an individual topic at next year’s Global Dressage Forum.