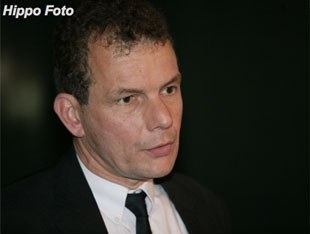 The final session of the day was on coaching and hyperflexion. Dr. Rene van Weeren, professor at the University of Utrecht , discussed his observations on his scientific research studying the low-deep and round (LDR) head position of the horse.

They took 7 Grand Prix horses and got them accustomed to the treadmill where they were tested and filmed by 12 cameras in ridden and unridden position. Two of the seven horses had previously been trained with the LDR-method. They discovered that the stride length decreased the most in an elevated neck position and that weight shifted the most on the hindquarters in that elevated position. So far, Van Weeren has come to the conclusion that from a biomechanical viewpoint there is no reason to contest this method (LDR/Rollkur/Hyperflexion). Andrew McLean made the very valid point that the prolactin and crotisol levels needed to be tested in the blood if one wanted to determine the stress level in the horses while being put in the rollkur position. 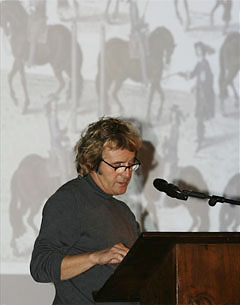 Sjef Janssen hasted himself through the ‘theoretical’ part of his lackluster speech on being a coach of Anky van Grunsven. He stressed that international dressage horses have to have a high performance training set-up in which the horses receive the best care. They are regularly hand walked, grazed and hacked and are guided by external consultants such as veterinarians, farriers, physiotherapists, chiropractors and nutritionists. The daily training of Van Grunsven’s horses goes in five phases. A 10-minute walk warm up, followed by gait transitions to get the horse quick to the aids. Then specific movements are trained very briefly and energetically in an almost upward frame. The final phase is the performance phase in which certain movements are trained in the show frame, before finishing with the cool down.

“The horse has to go back to the stable with a good feeling,” Janssen said. He noted that LDR is not a system but a tool to improve throughness in the body (durchlässigkeit). They only ride in the rollkur for brief moments of 10 to 20 seconds with very active hind legs and then get out of that position. The benefits of LDR, according to Janssen, are gaining a better connection with the horse, the whole body is trained and it is used to ride dominant or unfocused horses. The disadvantages are unskilled riders copying the method and the media who is unfamiliar with the method, “which caused the whole ‘opera’ in the media”. Coaching for Janssen is a matter of good communication between rider and horse and realizing the potential of the horse. 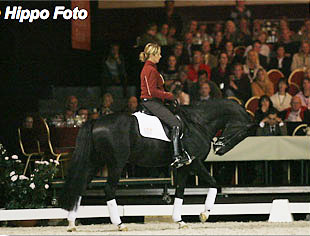 Janssen’s speech was followed by a training demonstration with the pregnant Anky van Grunsven riding Painted Black (by Gribaldi) in the rollkur position.

She warmed up the stallion hyperflexing him to the left and right on the straight lines. She made him really round, the mouth almost touching the chest, in halt, trot and canter for periods of 2 to 4 minutes, before letting the nose out again or giving him a break. Anky highlighted the importance of speed control, as she likes to alternate moments of intense collection lengthening of the strides.

After her short demo, van Grunsven and Janssen stepped up to the podium to take questions from the audience. Anky stated that “I am 90% sure I wouldn’t have been this good without this system. The horses are easy, soft on the aids and elastic. It makes the last couple of percentages that makes me the best.” 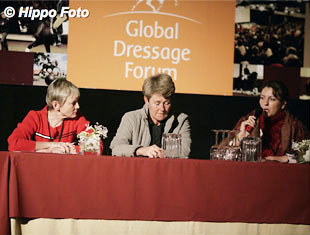 The Dutch duo was addressed by a panel that included Dr. Hillary Clayton, Kyra Kyrklund and St Georg journalist Kerstin Niemann. Kyrklund said that she doesn’t understand the benefit there is from keeping a horse so low and tight. “I don’t only evaluate the top horses trained on this system but also on normal horses.”

The debate with the panel exploded when Niemann was asked to comment on the demonstration. She noted that there is much pulling involved riding the horses LDR. Anky refuted that immediately and said the horses felt light in the hand. This is probably true as Anky’s horses are conditioned to LDR. 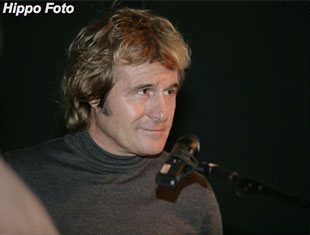 Unfortunately, Niemann was unable to engage in a real discussion or represent her magazine’s viewpoint on the rollkur. Van Grunsven got quite aggressive in her refutations but remained clear headed and correct. However, Janssen refused debate with German journalists Birgit Popp and Niemann. “I don’t talk to selective hearers,” Janssen said. Popp asked Janssen if he considered ‘learned helplessness as a tool too,’ which inflamed him and made the whole debate boil over with heated emotion. Fortunately, Dr McLean cooled everyone down by saying that he didn’t see anything problematic but that it LDR can not be used as a smokescreen for other problems in the horse sport.