Michelangelo, Trakehner Stallion of the Year 2006 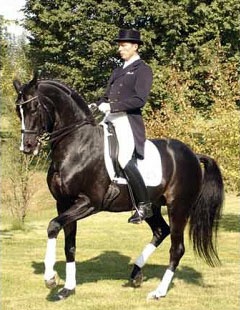 Elite stallion Michelangelo has been proclaimed Trakehner Stallion of the Year 2006 at the Trakehner Licensing in Neumunster, October 29, 2006. Breeder Lieselote Heinen and owners Mr and Mrs Erdsiek of Gestut Webelsgrund were honoured by Petra Wilm

, president of the Trakehner Society, at the licensing.

The 21-year old stallion Michelangelo is by Pasteur xx out of Elite Mare Miami (by Matador). Not only did he have an important influence on Trakehner breeding, but the bay sire was also instrumental in the refining of horses of other warmblood breeds.

Michelangelo has 14 licensed offspring, including the renowned Kennedy. Michelangelo is trained to S-level himself and has various offspring competed at the highest level in dressage. One of his most famous progeny is the recently deceased Grand Prix horse Just Mickey, who won team bronze at the 2005 European Dressage Championships and who compeed at the 2000 Olympic Games in Sydney.