Leida Collins-Strijk and Florett As Ready for the Big Time 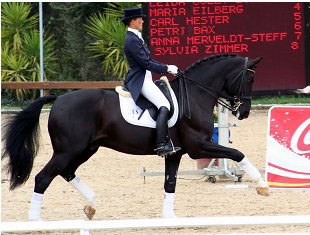 Besides her confirmed number one horse On Top, Leida will be introducing her 9-year old Westfalian licensed stallion Florett As to the big tour this winter.

“The plan is to show Florett in the Intermediaire II next month and move him to Grand Prix next year,” Collins explained. “He will be competed at a few local shows first so that he gets confident in the ring and then he will be presented at bigger shows in Holland and possibly the Sunshine Tour CDI in Spain.”

Florett As has been extremely successful at small tour level in 2005. Under Leida, he impressed the judges at the Sunshine Tour in Spain, where he was consistently marked in the upper sixties and low seventies. He moved up the ranks to win two Intermediaire I freestyles in The Netherlands and scored 71.8% at the international CDIO Hickstead and 72.9% at the CDI Saumur.

The beautiful black stallion Florett As (by Florestan x Urofino x Goldlack x Pilatus) is not only making his marks as an international dressage horse, but his breeding career has taken flight as well. At the prestigious 2006 Equine Elite Auction, the price highlight of the collection was the bay mare Willow, by Florett As. She sold for 310,000 euro to Switzerland and will be trained and competed by Dutch Olympian Imke Schellekens-Bartels. In 2005, three Florett offspring were selected for the VSN-Trophy Finals and one finished fifth.

“We are absolutely crazy about his offspring,” Collins said. “They have a fantastic brain and are very trainable. They have amazing elasticity and a spectacular connection with the body.”

Florett As was champion of the 2000 Westfalian Stallion Licensing in Munster, Germany, and in his stallion performance test he scored 9 for walk and trot, 9.25 for canter, 9 for temperament and 8.5 for his jumping technique. As a 3-year old he finished third at the Bundeschampionate before moving to The Netherlands. He is licensed for the Westfalian and Rhinelander Verband and the NRPS breed society.

Based in Riethoven, The Netherlands, with her Bermudan husband Tim Collins and their two children Sebastian and Christian, Leida Collins-Strijk manages a sales and training facility for performance horses together with her husband. While Tim focuses on training and marketing international show jumpers, Leida is responsible for the dressage youngsters as well as the FEI level horses. They have about twenty Florett offspring in the field waiting to be developed into future dressage stars and sparkle in the ring just like their sire.

More info on Florett As and Leida Collins-Strijk at:
http://www.team-collins-strijk.com/