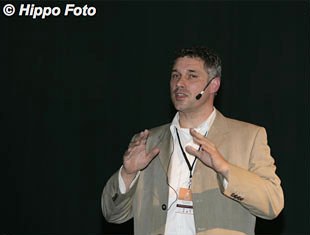 The next session was by the Dutch sport psychologist Dr. Rico Schuijers, who has worked with the Dutch team riders in preparing them mentally for competitions. Schuijers stressed that for optimal performance the competitor needs to empty his mind of any distraction and become mentally tough.

Typical mistakes made by stressed riders are program errors, riders trying to do their best and asking more from the horse than it is used in training sessions, and abnormal physical reactions (quick breathing, stiff shoulders) which change the rider’s position in the saddle. For optimal performance, the rider’s attention should only be on “me and my task” and he should not be distracted by outer stimuli, nor on winning or losing and its consequences, nor should he be asking the semi-existential question of “what am I doing here?” 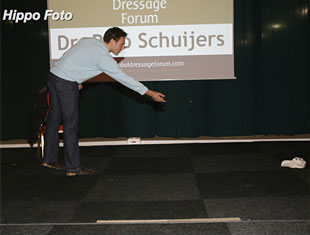 To demonstrate concentration and focus, Schuijers asked Grand Prix rider Laurens van Lieren to throw ten coins in a hat. On his first attempt, he threw in 4. He was then asked to set a new, realistic goal and focus on the arm movement he made when he successfully threw a coin. When Van Lieren repeated the exercise he threw in 7. Schuijers also put the 2000 Olympic bronze medalist in archery, Wietse van Alten, on stage to demonstrate how stress affects the heart rate and breathing. Archery and dressage are both concentration sports and breathing techniques can be efficient to reduce stress during a performance. After moments of distraction, it took Van Alten 15 to 20 seconds to get back into the comfort zone via controlled breathing (breathing out one second longer than breathing in). 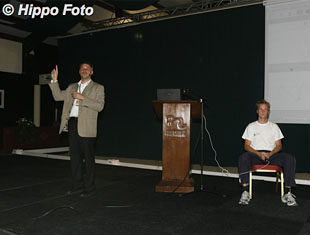 In a Q&A session, Dutch Olympian Imke Schellekens was asked to talk about her experiences working with Schuijers. She confessed that she had to get rid of a few bad influences, and one was having her father around in the warm up. “I got nervous and distracted by him being there. At Athens he sat outside the arena and I was very proud that he could stay away. At Aachen on the big screen, I saw my own face and my husband, who was nervous, and I got scared. I concentrated on getting the good feeling again. I know how I should feel and I try to get to that feeling,” Schellekens explained. Imke’s father Joep Bartels, the organizer of the Global Dressage Forum, added that “I am a high energy person and Tineke [Joep’s wife and former dressage Olympian] liked my presence. She needed me to get the high energy herself. Imke is already high energy.” Overall, Schuijers was quite inspirational in his speech, but he could have given more techniques to train concentration and relaxation at home, maybe by touching upon the principles of Neurolinguistic Programming (NLP).