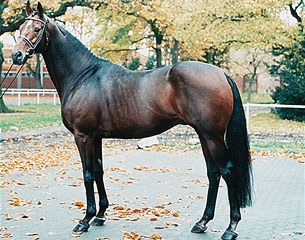 The nomination of the 15th "Hanoverian Stallion of the Year" was one of the highlights of this year’s Stallion Licensing. It was the first time that a thoroughbred stallion was honoured with this award: These last few years, Celle State Stud Stallion Lauries Crusador xx has certainly had a considerable influence on the Hanoverian breed.

The Hell Stable in Klein Offenseth is the owner of the bay refiner. It was the first time that the prize was donated by the insurance company R + V / Vereinigte Tierversicherung. The company is one of the leading European horse insurance companies, and they are obviously about to increase their supporting activities in Verden.

Lauries Crusador xx by Welsh Pageant xx/High Top xx was born in Great Britain in 1985, and he started his career on the race track. With an impost of 90,5 kgs, he was accepted as a breeding stallion for the German warmblood breed. The well-known horse expert and stallion owner Maas J. Hell, who died some years ago, discovered the bay horse. He maintained good contact with State Stud Manager Dr. Burchard Bade, and in 1991, Lauries Crusador xx became an active breeding stallion for the Lower Saxonian National State Stud in Landesbrück. 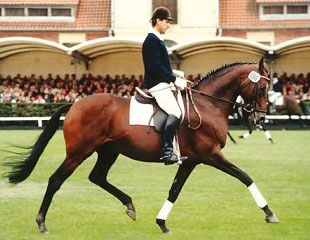 He was frequently used by the breeders right from the very beginning. He had not only a considerable influence on the mare population in the Kehdingen area, but also on the whole Hanoverian breed. There are totally 1560 registered offspring, 349 mares registered into the Studbook, among them 103 state premium mares. He fathered 39 licensed sons, 13 of them being registered into the premium stallion register. 546 registered competition horses complete this impressive balance. With his successful offspring, the thoroughbred stallion Lauries Crusador xx is certainly about to create a new Hanoverian stallion line.

Le Bo counts among his most successful offspring in sport. In 2005, he ranked third at the German Dressage Championships for lady riders under Carola Koppelmann. The former Verden elite auction horse Lesotho and Ellen Schulten-Baumer belonged to the Olympic team in Athens. The stallion Louis Heslegard and Gerda Lehmann participated with the Grecian Olympic team. At the World Equestrian Games in Aachen, Le Primeur competed with Marie-Line Wettstein for Switzerland.

The Lauries Crusador xx-son Londonderry created a sensation; he won his stallion licensing as well as the Federal Championships of four-year-old stallions in Warendorf. Apart from that, he also underlined his excellent prepotency. Two of his sons entered the scene this year: Locksley II won the Federal Championships of four-year-old stallions, just like his sire, and at the 115th Verden Elite Auction, Londontime was sold at the incredible, sensational price of 510,000 euro, a sum never achieved at a riding horse auction organized by a German breed society so far.