The Purification of the Pony Sport. The FEI Needs to Ban Over-sized Ponies 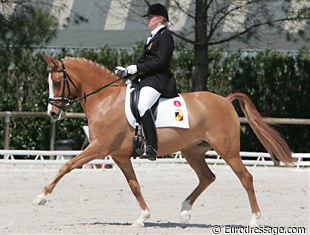 The new FEI secretary-general, Michael Stone, is cleaning house and re-introducing fair play and purity in the international equestrian sport, and specifically in the corrupted and fraudulent international FEI pony scene.

Following a series of strong complaints from parents of pony riders and a media campaign raising awareness about fraud in pony measurement, it was brought to Stone's attention that a huge number of ponies on the FEI circuit are over-height (+148 cm), but have life measurement certificates allowing them to compete against real ponies.

The FEI Pony Riders' committee, led by Mrs Nici Kennedy, alerted national federations of its recommendation to abolish the FEI official measurement certificate for ponies. A proposed rule change (from 1 January 2007) will require all ponies to be measured on site at FEI competitions and any over-height pony needs to be sent home.

The proposed rule change will be put to the FEI bureau in November, following consultation with all national federations closing on 30 October. Eurodressage wants to stress the importance of the acceptance of this rule change and Michael Stone's vital role in the whole procedure as he will be in charge of running a bureau that stands for fair play and ethical behaviour in the sport.

On-site measurement needs to be the standard at FEI competitions and it is the FEI's job to keep a watchful eye over animal welfare while measuring ponies. When Top Sport is involved, the end often justifies the means. Tricks to "measure in" ponies are not uncommon and the road to a show for an over-sized pony is tough. There are those who do not refrain from withholding water for two days or overworking the pony so it can barely stand up to its normal height. Painkillers and tranquillizers are also applied for relaxing the pony and making him stand smaller. Furthermore and more shockingly, cruel practices such as a nail or thumbtack on the measurement stick needling into the pony's withers are also applied to make the pony crouch while being measured.

Animal welfare needs to be the number one priority and ponies need to behave normally when being measured. Therefore it is important that painless and non-traumatizing measurement by laser is done on a straight horizontal concrete floor to be precise.

The proposed rule change has generated immense amounts of support from pony breeders, riders, pony parents, trainers and judges world wide. Pony parents from Holland, Germany, Denmark; Sweden, Belgium, France, Canada, The United States and even South Africa have emailed Eurodressage to show their support. One striking reaction was, "Besides the fact that the trainers and parents are teaching their children that it is 'Ok' to cheat to win, what kind of new horse people are we training up here anyway. Ethics / honor and fair play should be taught to all of our children starting at a young age."

Many officials have also reacted to proposed rule change. Dutch Pony dressage chef d'Equipes Christa Laarakkers follows the entire case very closely as well as Olympic judge Jan Peeters who told Eurodressage that "it's a good that this whole issue has been brought to public attention and that the FEI is taking the right measurements against it."

The response in the media to pony measurement fraud is staggering. Dutch equestrian newspaper Paardenkrant, British leading equestrian magazine Horse and Hound as well as Germany's largest magazine St.Georg have devoted articles on the issue and are printing stories discussing the proposed rule change. Also, Olympic dressage rider Coby van Baalen has published the latest news on the issue on her official website.

FEI Dressage Committee chairwoman Mariette Withages is aware of the current problems in the pony circuit and is paying careful attention to the development of the proposed rule change within the bureau.

As brand new FEI secretary-general Stone needs to make a clear statement that corrupting FEI rules will not be tolerated, if the "Equestrian Sport" wants itself to be taking seriously as an international, Olympic sport.