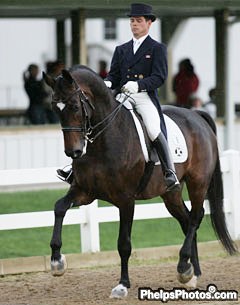 The FEI World Cup Canadian League Final, sponsored by Yamana Gold, and Dressage Canada Grand Prix Freestyle Championship will once again be a highlight of the Royal Horse Show, held November 3-12, 2006, as part of the Royal Agricultural Winter Fair at the National Trade Centre

The contenders in this year's Canadian League Final include:

Canadian Olympian Evi Strasser of Ste-Adele, QC, leads the Canadian League standings heading into the Final, having accumulating 50 qualifying points throughout the season. Riding her 2006 World Equestrian Games (WEG) mount, the 11-year-old Oldenburg gelding Quantum Tyme, Strasser picked up valuable points after placing fourth in the Grand Prix Freestyle with a score of 71.50% at the CDI3* Gold Coast Opener in Florida. In Canada, she won the Freestyle at both the CDI3* Ottawa Summer Classic with a score of 71.75%, and the CDI3* Blainville Dressage International where she earned an impressive 73.675%. Following their wins on Canadian soil, the pair headed to Europe to prepare for the World Equestrian Games where they placed sixth in the Freestyle at CDI3* Pompadour, France, and tenth at CDI3* Fritzens, Austria. Strasser and Quantum Tyme maintained their strong presence by being the top placed Canadian combination at the World Equestrian Games in Aachen, Germany.

Finishing in second overall with 25 points is Jacqueline Brooks of Mt. Albert, ON, paired with Gran Gesto, an 11-year-old Oldenburg gelding owned by Anne Welch and Brinc Ltd. Brooks earned her World Cup qualifying points in Florida, placing seventh in the Freestyle at the CDI3* Palm Beach Dressage Derby with a score of 68.225% and third at the CDI3* Zada Enterprises LLC WEF Dressage Classic with 70.75%. Brooks and Gran Gesto earned a place on Canada's World Equestrian Games team and traveled to Europe for preparatory training and competition. Although an ill-timed hoof abscess prevented them from riding in Aachen, they enjoyed impressive results competing in lead-up competition including second place in the Freestyle at CDI3*Pompadour, France, and ninth at CDI3* Fritzens, Austria.

The third place finisher with 23 points is Jon Costin of Puslinch, ON. Riding his 10-year-old Hannoverian gelding Wholio, Costin acquired World Cup qualifying points at Ohio’s CDI3* Paxton Farms in May where he placed second in the Freestyle with a score of 66.75%. A third place finish with a score of 66.167% at CDI3* Blainville Dressage International gained him additional points in the League standings.

At the Royal Horse Show, competitors will start with a clean slate. They will perform in front of a five-member ground jury that includes President Cara Whitham of Canada (FEI 'O'), Marian Cunningham of Peru (FEI 'I'), Lorraine Macdonald of Canada (FEI 'I'), Jessica Ransehousen of the United States (FEI 'I'), and Katrina Wuest of Germany (FEI 'O').