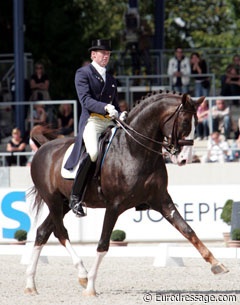 The brand new 2006 Swedish Dressage Champions, Jan Brink and Bjorsells Briar, have withdrawn from competing at the CDI-W Aarhus in Vilhelmsborg, Denmark, this weekend. During the Swedish championship last weekend Björsells Briar got injured.

After consulting the vet of the national Swedish team, Brink made the decision to withdraw from the upcoming World Cup competition. The Swedish Champion regrets that he and Briar is not coming to Vilhelmsborg, but he emphasized that it is very important that Briar does not strain the light twist he sustained.

The Danish Riding Association is making it possible to follow the whole World Cup Grand Prix Kur to Music class live on Sunday via live streaming. The streaming can be reached by www.rideforbund.dk.