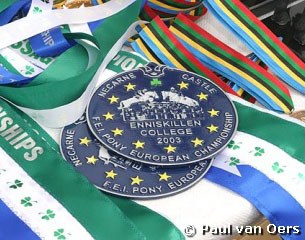 The FEI secretary-general Michael Stone has decided to take drastic actions against the corruption taking place in the measurement of FEI Dressage Ponies.

Following a series of strong complaints from parents of pony riders and a media campaign on Eurodressage.com raising awareness against fraud taking place in the current European FEI pony sport, Michael Stone was notified of the corruption and fraud of FEI official measurement certificates for ponies.

"It has come to our attention that a number of ponies competing on the International circuit are over height and have certificates issued for life. These life certificates are issued when a pony reaches 7 years old," Stone told Eurodressage. Consequently, the FEI secretary-general finally decided to take action and make the pony sport pure again.

The FEI Pony Riders' committee, led by Mrs Nici Kennedy, alerted national federations of its recommendation to abolish the FEI official measurement certificate for ponies. A proposed rule change (from 1 January 2007) will require all ponies to be measured on site at FEI competitions.

In an interview with the British equestrian magazine Horse and Hound, Stone stated, "this is quite a radical step; I'm not sure it will be something all federations will be in favour of, but we have to have integrity."

Protest against the "horses" in pony sport arose right after the FEI conducted a random measurement test at the 2006 European Pony Championships in Saumur, France. The random test, in which jumping and dressage ponies were measured, showed that ponies competing at the European Championships were standing up to 10 centimeters above the officially allowed pony height of 148 cm (no shoes).

Mr Stone told Horse and Hound that the proposed rule change would be put to the FEI bureau in November, following consultation with all national federations closing on 30 October. "We're not saying anyone has been corrupt," he told Horse and Hound. "We investigated this following complaints and found a significant number of ponies are too big, so we're going to stop it." He also added that any over-height pony would be "sent home".

"We have considered the situation and have recommended to the National Federations a change in the rules that will remove the system of measurement certification and instead all ponies will be measured at all International events before they are permitted to compete. Consequently ponies over height will not be allowed to compete," Stone told Eurodressage.