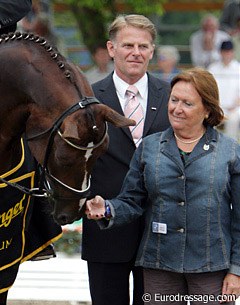 The FEI Dressage Committee held its second annual meeting in Turin (ITA) on 25 - 26 September at the kind invitation of the President of the Italian Equestrian Federation Ing. Cesare Croce. The members also had the opportunity to visit the venue

for the 2007 FEI European Dressage Championship for Senior riders in the beautiful park of La Mandria in Turin.

Some of the items discussed and/or decided upon and which will be submitted to the approval by the FEI Bureau were the following:

The Committee made some amendments to the FEI World Cup™ Dressage Final Formula for 2008. The number of finalist riders was reduced to 15 and the number of judges to five. It was further decided to introduce a new application procedure for Western European League and Central European League qualifying events as from 1 November 2007. The Committee also discussed and agreed in principle on the rules for a new North American League to replace the USA and Canadian Leagues after the 2007 FEI World Cup™ Dressage Final.

The members discussed and would recommend some changes and clarifications to the rules in relation to, amongst others, the draw for individual riders in team competitions; the draw for first individual competition for Juniors/Young Riders; prohibition of earphones during competition and the establishment of two additional categories of Dressage events – CDI4* and CDI5*.

A codex for judges was adopted and it was decided to introduce a Foreign Rider report to be outlined by the International Dressage Riders Club (IDRC) in addition to the Foreign Judge report.