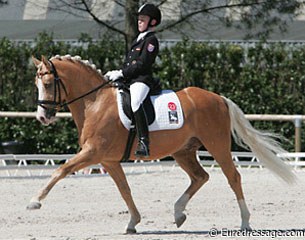 The first associations you make when you think about "ponies" are Tellwell cartoons, My Little Pony toys and cute little girls with pig tails riding cute little ponies with pink polo wraps and saddle pads. This image of amateur pony riding is opposite to what current competitive FEI pony sport really is. Young children ride with the focus and determination of professional athletes. Their ponies are trained and ridden by adult professional riders and prepared for the kids to ride them more easily. To compete at the European Pony Championships has become the ultimate goal of each driven pony rider and in order to get there, s/he needs a pony of top quality. This means a pony with outstanding conformation and the gaits of a warmblood horse.

After each European Pony Championship the bar is raised and the demand for better ponies increases to which pony breeders in Europe reply accordingly by breeding more beautiful, better moving ponies. There is nothing wrong with this pursuit for quality and excellence, but there is a major problem which has corrupted the pony sport this past decade. Ponies competing at CDI-P (CSI-P and CCI-P) competitions as well as the European Pony Championships are no longer ponies but horses!! The stand taller than 14.2 hh (148 cm shoeless, 149 cm with shoes) and nobody objects. Until now.

At the 2006 European Pony Championships in Saumur, France, the FEI conducted a measurement test of every fifth dressage and show jumping pony that appeared in the vet check. Independent FEI licensed veterinarians Dr. Stephane Montavon (SUI) and Dr. Karen Coumbe (GBR) conducted this measurement test in the presence of Dr. Frits Sluyter, Head of the FEI Veterinary Department, and Mrs Nici Kennedy, FEI Manager of Pony Riders. The results of this measurement test were staggering! 50% of all measured dressage ponies stood above 148 cm and almost all of the show jumping ponies were, in fact, horses! The FEI told Eurodressage that it is well aware of the "present irregularities" in the pony sport and is "currently seeking the best solution possible for all involved on the Pony Riders circuit." But so far, the FEI has taken no action against this fraud and it is most likely that it won't do anything if the matter is not being pushed by the pony parents, participants and press.

The major consequence and problem of competing horses in pony classes is that it creates an unfair competitive environment in which kids on 'real' ponies are disadvantaged to children riding 'horses' who have more scope, suspension and ground covering gaits and, therefore, will automatically score higher in dressage tests or jump higher over fences. It is a fact that at the 2006 European Pony Championships, several medals were giving to horses instead of ponies.

Parents of pony riders have difficulties explaining to their children why they won't buy the ultimate dream pony because he's too big and competing it is not according to FEI rules and regulations. Other children, however, are living the dream riding falsely measured ponies and break rules by showing them internationally. Furthermore, children shouldn't ride 'horses'. They don't have the physical strength of adults to push their ponies in the frame, and keep them collected and together at all times. The result is that adult professionals break, train, school, and compete these so-called FEI ponies at Fourth level or even Prix St Georges level at regional shows in Europe. Afterwards, the child is put in the saddle to qualify this"pony" for the nation's team and then takes him further on to the European Championships. They win a medal, but can take little pride in saying that they were responsible for bringing along a pony to the highest level of pony dressage in Europe.

The origin of this FEI-rule-corruption lies with the national federations who allowed any veterinarian to sign a measurement document with a false measurement on it. They closed their eyes to real height of the pony, signed a document with a fictitious measurement, which was then put on the pony's FEI Passport.

At the moment, each country does have FEI licensed veterinarians. For instance, in Holland, there are three FEI vets at the University Equine Clinic of Utrecht. In Germany, there are four FEI licensed vets. But these FEI vets can't fix the old problems unless serious changes are carried out by the FEI.

In order to live by its own rules and to make the pony sport "Pony Pure" again the FEI should re-measure every single pony, that is going to compete at FEI pony level (nationally and internationally), before the next show season (January 1, 2007). To compete internationally, a pony rider needs a current, valid, and correct measurement document for that competition year. At the 1983 European Pony Championships in Vetlanda, Sweden, all participating ponies were re-measured at the start of the show. If a pony was too tall, he was disqualified and sent home. Maybe this strict "measurement" should be the rule again. The time for pony sports is too short for children to have to deal with "horses" and to have to wait for the FEI to clean up its act.

Parents, riders and trainers of FEI ponies are gathering now in support of banning horses from the pony sport. A petition has started in which parents send in their support for the "Pony Pure/Ban Big Ponies" cause. Write to Eurodressage.com, we will gather all your letters and pass them onto the FEI, so that they are sent to the right FEI person at the right time. Action needs to be taken, now!

Email your letters to: info@eurodressage.com