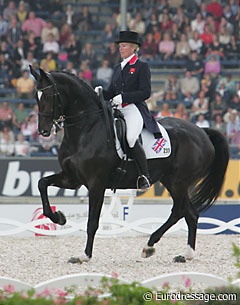 British dressage rider Sandy Phillips claimed the national Grand Prix title with her Rhinelander mare Lara at the 2006 British Dressage Championships. Some 350 competitors converged on Stoneleigh Park in Warwickshire for the biggest show in the British calendar

, the 2006 Blue Waters National Dressage Championships, which ran from 14-17 September.

British World Equestrian Games team member Sandy Phillips was riding at the nationals for the first time in several years and won the Grand Prix with her 12-year-old 17hh German-bred mare Lara on a score of 70.63%. Sandy said: “Lara did a good job at the WEG, but was a bit lit up as there was quite an atmosphere. I wanted to come here and produce a more relaxed test and she did that. She gives everything and I’m so lucky to have found her.”

Sandy Phillips became national dressage champion for the first time, having gained the highest combined scores from the grand prix and grand prix freestyle during the 2006 Blue Waters National Dressage Championships. Sandy and Lara won the grand prix and finished second in the Grand Prix Freestyle after a close-fought competition with Spencer Wilton and Dolendo.

“I was surprised to win the freestyle as we made a mistake in the one-time tempis, but I did have room in test to have another go, which would have improved our mark slightly,” said Spencer, who is heading off to his first international competition abroad tomorrow with the 12-year-old 17.1hh gelding by Donnerhall. It will be their second international show. “We are learning together, which means it can be a bit hit-and-miss sometimes.”

Sandy Phillips and Lara finished second with 72.6%. They also made a mistake. The 12-year-old mare mistook her rider’s aid to go from passage to a trot half-pass for a canter aid.

Jo Lees bought the winner of the preliminary title two years ago from well-known dealer Sandra Biddlecombe and gave the ride on her five-year-old 16.2hh Sir Nario to Victoria Bailey as she is five-months’ pregnant.

“Sir Nario had a year off last year as he was growing so fast and only came back into work in the spring,” said Jo.

Victoria, who is in her final year of a business degree, only started affiliated dressage this year after having to retire her home-bred show jumper. “I now have the dressage bug,” said Victoria.

Showmaker, ridden by Garry Williams, won the four-year-old section of the Pavo Potential International Dressage Horse Championships and then went on to become overall champion.

The 17.1hh Westphalian by Show Star is owned by Garry in partnership with a stud in Germany, where he is used as a breeding stallion. Showmaker has been a regular commuter between Britain and Germany and recently finished sixth in Germany’s extremely competitive and prestigious Bundeschampionat.

Garry said: “The more he does, the better he gets; he’s like driving a Bentley.”

Sarah Payne has high hopes for Sheepgate Ushipower, with whom she headed the novice open with 70.12%. She rates the five-year-old 17hh bay Dutch-bred gelding by Haarlem as the most talented horse she has ever ridden.

“I have my sights set on grand prix with him,” said Sarah, who owns him together with her husband Mark and father Bruce Grant of Sheepgate Equestrian Centre, Lincs. Sarah, who was on the British pony team in 1990 and 1991, now trains with Emile Faurie.

Flintshire-based Sarah Williams only started competing in affiliated dressage last December and won her first title on her first visit to the championships. She rode Revaldo, a five-year-old 16.3hh German-bred gelding by Relevant, to win the novice restricted with nearly 70%.

Sarah, who did showing and show jumping before turning to dressage, has ridden Revaldo since he was a just-backed three-year-old. She had a nerve-wracking wait to find out if she had won.

“I was third to go and had to wait 1½ hrs for the class to finish,” said Sarah, who is trained by Dianne Breeze.

It was Debbie Bridges’s first time at the nationals and she made her trip from Lanarkshire a worthwhile one. Debbie rode her own Dutch-bred eight-year-old Rechercheur, who is by Inspekteur, to win the elementary restricted with nearly 67%. She has ridden the horse she calls “Tony The Pony”, because he is only 15.3hh, for just over a year.

“This is my best result and has great sentimental value. I lost my dad suddenly a couple of years ago, which allowed me to buy my horses,” said Debbie, who runs a livery yard in Lanark.

Jenny Green’s Showtime lived up to his name, scoring nearly 72% in the elementary open ridden by Jenny’s 22-year-old daughter, Gemma, who was enjoying her first win at the nationals.

“We came here to prove how good he is, so this is a great result for all the team - my family, trainers, vet, farrier - and me,” said Gemma, who is trained by Henk van Bergen and Jennie Loriston-Clarke and has ridden the impressive seven-year-old 17hh Dutch-bred stallion by Contango for less than a year.

Gemma Green made it two out of two when she won her second title of these championships with Showtime. She headed a competitive medium open with 71.62% on her mother’s seven-year-old 17hh Dutch-bred stallion.

“I can’t ask for more. If someone had told me I would win both the classes I had entered Showtime in at the beginning of the week, I would have laughed,” said 22-year-old Gemma.

Jessica Dunn was astonished to have won the medium restricted title with her 10-year-old Belgian-bred mare Dunn To A T.

“We’ve had a bad summer with lameness and injuries, so I’m amazed to be here,” said Jessica, who is hoping to become an equine physio and also enjoys show jumping.

Former national champion Nicky Barrett headed the advanced medium with the eight-year-old 16.1hh stallion Faberge 50 with an impressive score of 72% despite making an error of course, which cost her 1.5%.

Nicky, who had a break from competing as she had a baby last year, was national champion in 2002 and has won 14 national titles.

"Faberge is the only horse I compete at the moment. He is the best horse I have ever had and I've had quite a few. He is so supple and loose and has a temperament to die for," said Nicky.

Carl Hester decided last year that his ambition is to win 40 national titles before he turns 40 next June. He is well on the way as winning the prix st georges here with Rowan Lewis’s Blakes Da Vinci brings his tally to 39.

“It was a stupid idea that turned into a goal. Now I need another win. I won’t be satisfied until I do it; the show is not over yet,” said Carl, who rode the laid-back eight-year-old 16.3hh stallion by Donnerhall to victory with a score of 71.6%.

Senior selector, judge and trainer Judy Harvey rode Richard Heley’s Fizcerraldo to win her first national title with 70.15% in the intermediaire I. She has had the German-bred eight-year-old 17.1hh gelding by Feuerbrand in her yard since a three-year-old.

"I have been waiting a long time for this. I have ridden at the nationals for 25 or 26 consecutive years now," said Judy.

Peter Storr, the British National Champion of 2000 and 2001, took the intermediaire I freestyle with Becky Whitcombe’s Desiderata on 73.1% having competed her at only a handful of shows.

Becky asked Peter to help out when she was having problems with the 13-year-old 16.1hh chestnut mare by Don Primero. The result was that Peter and Desiderata qualified for these championships and are, so far, an unbeaten combination.

Peter said: “I have only had her for one three-day and two 10-day stints. She is a pleasure to ride, as she is easy to communicate with, which makes her easy to train, but she has a quirk. She can be a quiet little mouse one minute and then turn into this raging beast the next.”

Carl Hester’s ambition to win 40 national titles before he turns 40 next year is still possible even if he doesn’t count his victory in this class with his own four-year-old Valegro. He took his tally of national titles to 39 when he won the prix st georges yesterday, but decided to count this win as only half for the moment as he has another ride to come.

Carl bought the now 16.3hh gelding by Negro at a stallion licensing show in Holland as a 2½-year-old. As a three-year-old, Carl thought Valegro wouldn’t grow big enough for him and nearly sold him twice. Carl did sell him to Henriette Andersen, but only for five days and then bought him back. After that, he took him to Holland to be sold when he was on his way to an international show with Escapado.

“On the way home from the show, I stopped off and had another look at him and thought ‘what am I doing, I love this horse’. I told the dealer he was no longer for sale,” said Carl.

Hampshire-based freelance trainer Jodie Lister has brought her 11-year-old 16.2.hh Dutch-bred gelding Nicky up through the ranks since a three-year-old to win the intermediaire II title here.

Jodie, who trains with Jennie Loriston-Clarke, said: “He tries his heart out and has exceeded all my expectations. We won the elementary title here in 2001, but I never dreamt we would win at this level.”

Jodie and Nicky are also competing in the grand prix.

“This is our first season in the big tour and we are still green in grand prix, so we’ll just enjoy taking part in that class,” she said.

The much-admired amateur Dr Steph Croxford achieved a creditable third place in this class with Mr President, which was a particular achievement as her saddletree broke in the middle of her test.

“When I took the saddle off in the warm-up arena after the test, it just fell apart,” said Steph, who had to borrow a saddle for the prize giving.