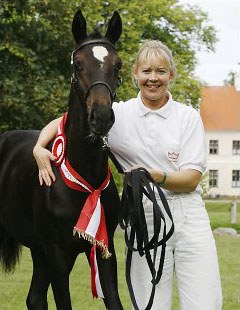 In the foal auction following the mare show, Don Perignon sold for the top price of 300,000 Danish Kroner (40,206 euro) to Blue Hors Stud. This is a record price never before achieved at a Danish Warmblood Foal Auction. The previous record was 125,000 DKK (16,750 euro) which Blue Hors paid for the now licensed stallion Don Romantic (Don Schufro x Romancier) in 1999.

The Danish warmblood society proclaimed Manifique Lightfoot as Filly of the Year 2006. Lightfoot is a bay filly by Onassis out of Maryland (by Michellino) and is bred by Annette Lyngs and Torben Damsbo. Most expensive filly selling at the auction was Vanillivi, a Sandro Hit x De Niro offspring, bred by Lena and Ulrik Kristensen. Vanillivi sold for 1001000 dkk which is 13,400 euro.

The 2-year old Danish Warmblood Mare Champion of the year was Diana, by De Noir out of Swallow Logo (by Schwadroneur). Diana is bred by Tina and Peter Knudsen of Stal Petit in Dokkedal, Denmark.

More info about the Elite Mare Show at www.varmblod.dk