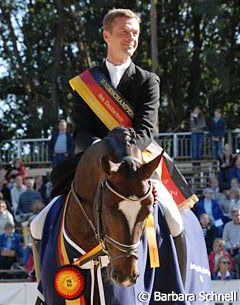 No retirement for Möller but another Bundeschampion's sash instead! He won the 5-year old division on Sir Donnerhall. Ulf Möller rejoiced as he used to state that he'll "only compete again if I get a world class horse." Sir Donnerhall put him back in the saddle.

Carola Koppelmann on Donavan became the reserve champion of whom many believe he should have been the champion! He scored 9.0 for canter. Susan Pape and San Remo won the first two qualifiers but dropped to a third, bronze medal place in the finals. They got the same mark for canter as Sir Donnerhall: 9.5.

Stephanie Jansen (who once rode the six-year-old Dornik Double to vice champion title) and her 5-yr-old Pretender, a horse she picked herself as a two-year-old and trained herself so far, guided by Jan Nivelle. She got a very nice, encouraging commentary for her harmonious presentation and placed 6th in the finals.

Bernd Nöthen and Daily Pleasure (by De Niro) were the only pair in the 5-year old Dressage Horse Finals that scored a 10. They got a ten for their beautiful, relaxed trot work. 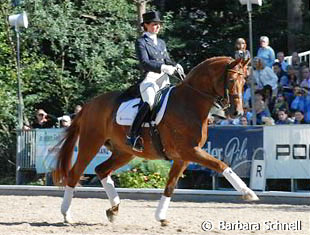 Monica Theodorescu & Whisper do a demonstration of a new test for young Grand Prix horses that the German Equestrian Federation will launch next year.

The Bundeschampionate are one of the best attended equestrian events in Germany. The audience crowds round the arena to get a glimpse of the youngsters.

Back to the 2006 Bundeschampionate Index