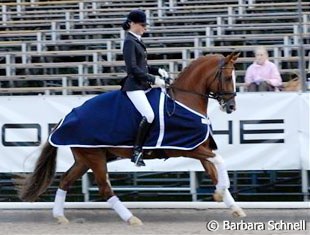 Barbara Schnell attended the 2006 Bundeschampionate and came back with the following photos and impressions on the fantastic pony classes in Warendorf, Germany.

In the 6-yearr old dressage pony class Friederike Hahn won on Honeur. Five minutes after she happily received her winners' ribbon, she was on the ground surrounded by medics because her pony had spooked Salinero-style, jumped out of the warm-up ring and slipped badly on the concrete. Fortunately, as far as could be told on Friday night, horse and rider had only suffered minor injuries.

Crowd-pleaser Voyager ranked second under Helena Camp; he also placed second in the eventing pony class (where he was champion last year). Last year's champion Don't Thatch and Verena Leuchten presented another round that was very easy on the eyes, and placed second. 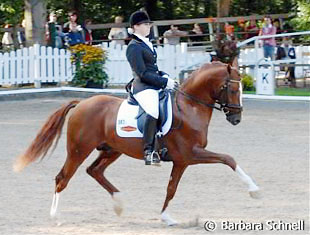 Riders in the 6-year old pony class became victims of the new qualifying rules, especially Nadine Surmann and her lovely Don't Forget, whose nerves weren't quite up to the challenge today even though he clearly is a pony that would have belonged in the finals. But it wasn't the obvious quality of the pony that was judged, it was his nerves, and with a 5.3, the pair could only go home.

Back to the 2006 Bundeschampionate Index