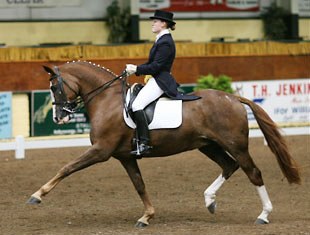 Claggan Roxy Music also won the Airtricity Holdings award for the best performance by an Irish bred horse at the championship. Laragh wasn’t the only rider from north of the border in great form at Cavan this year.

Yvette Truesdale also scored a hat-trick of wins with the Jim Burgess owned Has to be Fun. Yvette remained unbeaten throughout the championship and opened her account with a decisive win in the Olympic Saddlery Prix St Georges championship with Lucy Adams from Carryduff, Belfast in second place with her Northern Ireland summer finals Open champion Ben Hymn ahead of Limerick-based trainer Donie McNamara and Theodore the Brave. The South Eastern Region Intermediaire I championship was the first class in the main arena on the final day with Anne Marie Dunphy and Heritage Mercury setting the early target of 64.38%. Yvette and Has to be Fun produced a flowing test which found favour with judges Holsthaus and Phillips and they were the clear winners with a score of 68.00% with McNamara taking the yellow ribbon once again.

Appropriately Truesdale completed a three-timer by winning the northern region sponsored Prix St Georges freestyle championship with visiting British judges Sally Lidsey and Trish Gardiner giving her top marks for a professional performance which finished with three time changes all the way down the centre line to a perfectly executed halt at G for a score of 69.00%. Donie McNamara and Theodore the Brave scored 63.63% for second place. 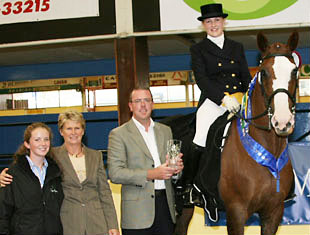 The €1,000 first prize in the Dressage Ireland/Irish Horse Board Potential Irish Dressage Horse final went to Mrs Jinnie Webb from Dublin owner of the five year old gelding Ballyboe Integrity by Ricardo Z out of Gift of Sally (ISH) by Lucky Gift (TB). The breeders prize of €300 was won by Gerard Marshall from Clonmel, Co Tipperary. Ridden by Sue Smallman the winner was the unanimous choice of the two presiding judges Sandy Phillips and Kerstin Holsthaus.

The final of the silver spurs which is aimed at finding talented riders for the future saw Shauna Finneran from Galway win the pony rider ride-off, a win she dedicated to her mother Eleanor who is recovering from a very serious car accident, Tansy Greenlee from Cork claimed the junior title with young rider Nicola Fitzgibbon swapping the show jumping ring for the dressage arena on this occasion to easily win the young rider title.

Each of the winners and the two runners-up in each section receive a €500 training bursary from the Irish Horse Board and the €4,500 sponsorship package this year was the biggest in the history of a competition which has seen previous winners such as Heike Holstein and Judy Reynolds go on to compete at the highest level for Ireland.

Photo copyrighted: Jim Prime -
to order pictures of the Irish Dressage Championships, contact Mr. Prime at primephotography@msn.comor by phome at +44 777 181 72 87