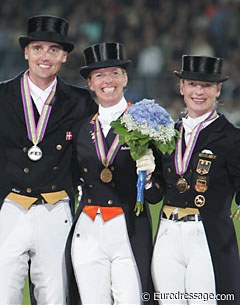 The 2006 World Equestrian Games for dressage came to a conclusion on Saturday evening August 26, 2006, with a historic, unprecedented and unique Grand Prix kur to music class in the main stadium in Aachen.

With almost 50,000 spectators completely filling up the seats and standing area, dressage as a sport has proven to be hot, hot, hot!

Fifteen riders qualified for the freestyle and it was the Queen of the Kur, Anky van Grunsven, who waltzed her way to Kur Gold. With a score of 86.100%, she stayed far ahead of silver medallist Andreas Helgstrand (81.500%) and bronze medallist Isabell Werth (80.750%).

Aboard her Olympic mount Salinero, a Hanoverian gelding by Salieri x Lungau, van Grunsven rode her fabulous Slings & Kerkhof composed "L'Esprit Chanson" freestyle for the umpteenth and probably last time. Van Grunsven's music is far superior to any other tune that played in Aachen and this gave her extra points, for sure. At the beginning of the test she was behind her Edith Piaff inspired music, but caught up in the middle of the ride. Salinero's passage was uneven, showing more engagement with his left hind leg than his right, but in the middle of the test it evened out. The half passes and piaffe were delightful, though the contact with the bit could have been a bit lighter. The first of the single tempi changes was difficult and the changes could have covered more ground. There was no end halt. Despite this criticism, van Grunsven rode a very smooth test with lots of power and expression and continued to wield the axe of power as "Queen of the Kur". 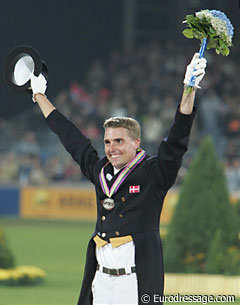 The silver medal went to the favourite of the crowd, the Danish Andreas Helgstrand. Throughout the show, Helgstrand has been carried to unprecedented heights in his dressage career by the spirit of the audience. He was stunned when he won bronze in the Grand Prix Special and he was thrilled with his silver Grand Prix kur medal.

Aboard the Blue Hors owned Danish mare Blue Hors Matine, Helgstrand seemed to have redefined piaffe and passage. The power, expression and suppleness of Matine's pi-pa, of course, comes at the certain cost at this early stage in her Grand Prix career. Though she doesn't look stressed, the tension of this super charged pi-pa performance is reflected in a perpetually swooshing tail and the contact with the bit that could be more through and light.

Helgstrand rode a brand new kur which was designed specially for Matine. The music is based on hits of the 70s, 80s and 90s, featuring songs such as "Que Sera" and "Lady Marmalade". Despite the fact that Matine is only 9-years old, the freestyle she had to perform required advanced technical Grand Prix skills which are usually only confirmed in a 10 or an 11-year old FEI horse.

Helgstrand opened with a highly difficult double pirouette, followed by one tempi's on the center line and another double pirouette. The mare moves in two pieces in the collected trot and can not seem to find clear balance and rhythm, despite the scope and ground covering in her gaits. A mistake in the single tempi's were peanuts compared to some gorgeous parts such as the canter extension and the phenomenal piaffe and passage. With a score of 81.50%, Matine won silver and she showed their is room for much more! 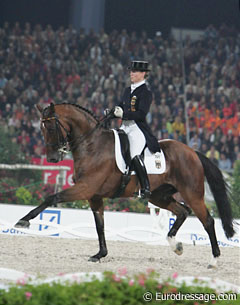 Isabell Werth and Madeleine Winter-Schulze's Satchmo (by Sao Paulo x Legat) entered the main ring in walk with long reins. Only when she rode round the main ring, she picked up the reins and started doing a rising trot. Riding to her third Grand Prix horse Apache's music (featuring Land of Hope and Glory), Werth excelled in the purity of her performance. Though the passage can be a bit more closed, it was even throughout the test. The canter is Satchmo's weakest gait, regularly losing the clear 3-beat rhythm in the collected pieces on the short side, but the flying changes and pirouettes are pure and correct. The only small hiccup was in the final piaffe pirouette where there was clear loss of rhythm. Werth and Satchmo did not spark enough to win gold as they did in the Special, but their kur was still very nice. 80.750% and the bronze medal.

The audience hoped that local heroine Nadine Capellmann (who lives in Aachen) would claim a medal in the Grand Prix kur, but she finished fourth (79.900%) after a ride below par, that was generously scored. Nadine's music is superb. It does not have the precision of a Slings & Kerkhof kur, but Elvis Presley's vocals heard throughout the ride generate a goose bump effect.

Capellmann's kur ride lacked smoothness and it was obvious that she and her horse were not on the same wavelength. The first piaffe was hesitant, the second rhythmical but the third, which was performed in a pirouette, had loss of rhythm. Elvis' powerful passage, which is probably better than Matine's because of its naturalness, was sometimes uneven as the rider could not keep a steady light contact with the bit. She was constantly making visual hand corrections which messed with the picture. Capellmann won team gold on Wednesday and for more medals, she'll have to try again at the 2007 European Championships in Falsterbo. 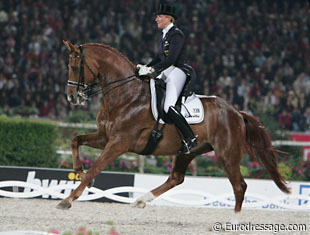 Heike Kemmer and Bonaparte landed a fifth place with 78.600%. Riding to new music which is a virtual copy of Capellmann's Elvis kur, but then featuring different songs such as Good Vibrations. There were many small mistakes that kept the German pair from a medal. The piaffe-passage transitions were not always smooth. The pirouette right was too big, the pirouette left hesitant, the one tempi's were flat and in the two tempi's, Kemmer made strong half halts with her hands, which were to visual. Of course there were great pieces in her ride too. The silhouette of Bonaparte is one of the best in Aachen. The horse is constantly uphill, light and focused and his trot and canter extensions are text book.

Finnish Kyra Kyrklund rode a new freestyle as Max had outgrown his previous 'Grand Prix baby' Enrico Moriconi freestyle. The new one is still quite bombastic with many hobo and clarinet tunes, but it suits the pair well. The highlights of the ride were the pirouettes with one hand (see photo) and the superb extended walk. The two tempi's could have been more uphill and the ones straighter. The final passage showed a twitching left hind leg before X but that smoothened out before G. Kyrklund scored 77.300% and placed seventh. 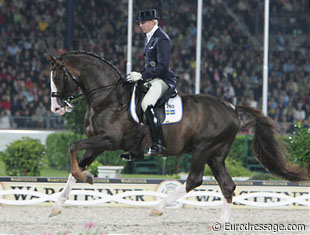 Kyrklund's Swedish student Jan Brink landed a ninth spot with 75.800%. A mistake in the two tempi's and a difficult transition to canter were the biggest booboo's of the ride. The walk could have been more ground covering. As usual, Mr. Goransson's Briar (by Magini x Kroket) stood out with his piaffe and passage.

The prize for the best contact with the bit should have gone to Swiss Silvia Ikle and her Swiss bred Salieri CH. The horse was soft and light in the mouth all the time and Ikle kept her hands quiet throughout the ride, while Salieri was clearly at peace with the contact in his mouth. It was delightful to watch!

The piaffe-passage tour highlighted Ikle's kur. Salieri is in total harmony with his rider. He piaffes and passages with no sign of tension at all. The canter half passes were great, but the trot half passes showed loss of balance and the extended walk was mediocre with insufficient overstep.