Germany Gets Gold But Helgstrand Dazzles 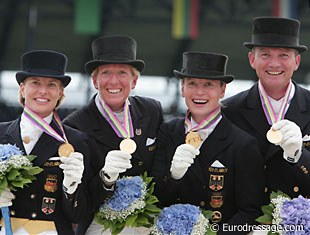 With outstanding rides by Isabell Werth and Nadine Capellmann, the German team was able to secure a solid lead in the nations' competition at the 2006 World Equestrian Games. They won the team gold medal with a big advance (223.625 points)

The Dutch team was of course happy with their silver medal, though they had secretly aimed for gold. Anky van Grunsven made two mistakes in her test and Salinero was quite tense, which caused them to land 'only' a third spot with 75.00%. Imke Schellekens' Sunrise was quite unfocused in the trot tour, but the mare seemed more relaxed and solid than she did at the 2006 World Cup Finals in Amsterdam. Edward Gal put in a very decent ride on Lingh and was a bit underscored. The KWPN stallion was attentive to the aids and smooth throughout the test. The piaffe and passage were very solid and rhythmical.

As expected, the U.S. team claimed the bronze medal. Guenter Seidel produced a score one could anticipate, but both Leslie Morse and Debbie McDonald stayed below par. Especially Brentina put in a lackluster ride. Even though the piaffe and passage were very harmonious and delightful to watch, the mare looked uneven behind in the extended trot and just gave an overall tired expression. The highlight ride for the U.S. team was without a doubt Steffen Peters on Floriano. They were brilliant and got a matching super score for it. 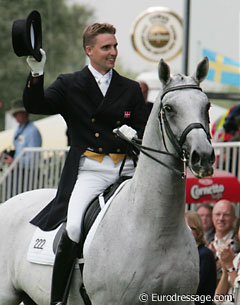 The ride of the day, however, came from Danish Andreas Helgstrand on his 9-year old Danish warmblood mare Matine. The mare by Blue Hors Silver Moon (by Kostolany) out of a Matador dam is well known in Denmark as the former young horse champion but she only made her international break through at Grand Prix level this year at the CDI Wiesbaden and Lingen. If you are impressed by Elvis' passage, than wait and see Matine's. This mare bounces half a meter off the ground both in passage and piaffe without losing rhythm, power and suspension. The crowds were gasping during the final piaffe-passage on the center line and the combination was the only pair to receive a standing ovation from the crowds! They scored a fantastic 76.333%

However, the ride was not flawless. You can see the mare is still green at the level and there were some uneven steps in the passage and Helgstrand constantly had to work on the bit to keep the mare completely through. Her mouth opened regularly and you saw that all that power in the movement was not resolved in the contact with the bit. Furthermore, Matine has a helicopter tail that keeps swooshing all the time (mainly in the pi-pa), but mares are more easily prone to do so (Wansuela Suerte does it too) and you still get an impression that she is relaxed in the movement.

Isabell Werth finished third with Satchmo with 75.000%, an achievement she must have dreamed of. Her first Grand Prix horse Warum Nicht was withdrawn from the WEG because of an injury and Werth now had to rely her 'unreliable' Satchmo who mixes moments of genius with madness. In the WEG Grand Prix, he had a genial moment, fortunately. The trot half passes were top quality and the piaffes were really good, though the second transition from piaffe to passage was hesitant. In the pirouette left he changes behind. The main problem with Satchmo was that he often became tight in the neck, especially in the piaffe and the passage could have been more closed and engaged from behind. Though it was an outstanding ride, the judges were generous with their 75% score.... 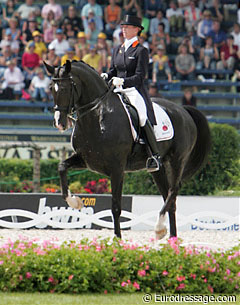 ...And they made no exception in their generosity for Anky van Grunsven and Salinero who tied in third place with 75.00%. Van Grunsven's WEG Grand Prix was not her highlight ride and did not come close to the fantastic test she delivered at the World Cup Finals in Amsterdam in April. The Hanoverian Salinero was tense again which clearly showed in the passage which was barely moving forwards. It looks like a piaffe moving forwards at very, very slow speed. Anky also made two unusual rider errors, picking up the wrong lead in the transition to canter and messing up the two tempi's (though the ones were good). Yet, there were also super moments. The final piaffe-passage on the center line and especially the transition to passage after X were brilliant and the extended walk was actually really good with two hooves overtrack and decent relaxation.

For Elvis VA and Nadine Capellmann, the World Equestrian Games seemed to have come one year too early. The pair has been scoring phenomenal marks this show season, but Elvis is not yet fully 'ripe' and that showed in the Grand Prix in Aachen. The piaffe has improved and the front legs don't open as much any more, but the ride generally lacked consistency. The extensions were of course extraordinary, both in trot and in canter. The extended walk was decent with one hoof overtrack. The zig zag looked ok. The second pirouette was rushed and the first change in the single tempi's was in two phases. The two tempi's could have been more relaxed though they are ground covering. Nadine's ride overall missed that finishing touch to be all the way up in the ranks. They placed fifth with 72.833%. Let's see how she manages the Special. 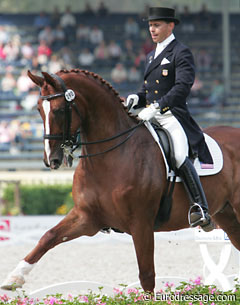 A thrilling ride was done by Steffen Peters and Floriano. This American duo has now become U.S. most successful dressage pair in the international ring, beating Debbie McDonald on Brentina as well as many other world class riders.

The extended walk and canter were breath taking and the piaffe-passage tour was really solid, though the passage could have shown a bit more power from behind. The flying change following the extended canter was a bit flat. The pair scored 72.708% and finished sixth.

Winning the 2005 CDIO Aachen last year will probably be Briar's best achievement in his career. Though the Swedish stallion is still world class, he no longer seems to be able to put in that extra spark to make him the winner. The piaffe and passage are still gorgeous, but he could be bouncing off the ground with more power. The second piaffe was delightful though. He's often been criticized for being spectacular in front but with nothing behind. In the extended trot he did however overtrack. It was essentially a mistake in the single tempi's that pushed Brink's score down to 72.167% and seventh place.

At the 2002 World Equestrian Games they were the revelation of the show. Four years later they helped secure the U.S. team a ticket to the 2008 Olympic Games in Bejing by winning the bronze medal, and that was all the steam that was left in Brentina in Aachen. She looked very tender behind in the trot extensions and a mistake in the two's kept the American duo from reaching the top of the leader board. The piaffe and passage are still so fantastically harmonious and a pleasure to watch, but the general power in the pair is lost. They scored 71.417% in the Grand Prix, won team bronze, and then withdrew from further competition due to an injury. 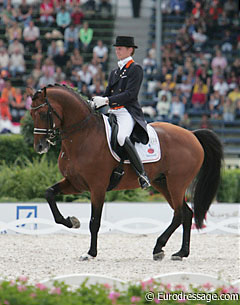 A pair who could have slightly earned a higher score in Aachen was Edward Gal with his KWPN stallion Lingh (by Flemmingh). They placed 10th with 71.375 for a lovely ride. At the European Championships in Hagen last year, Lingh was completely lackluster and tired, but here in Aachen he was on the job again.

The half passes were good, the first piaffe passage was good, the extended walk was relaxed but could have shown more overstep. The steps in the second passage were a bit uneven. The extended canter was outstanding, the two tempi's were good but the ones had a mistake in them.

The Finnish duo Kyra Kyrklund and her Swedish warmblood gelding Max finished in 12th place with 70.625%. The sweet Max is the most happy horse competing in Aachen though we've seen him on better form before. The transition to the second piaffe was difficult and the passage could have been more engaged. In the one tempi's the horse did not stay straight and made one short change behind. The extended walk was superb though. More can be expected in the Special.

Definitely rising to the occasion were British Emma Hindle and the Hanoverian stallion Lancet. Training with Kyra Kyrklund has definitely paid off. Hindle kept Lancet closed and collected throughout the ride. 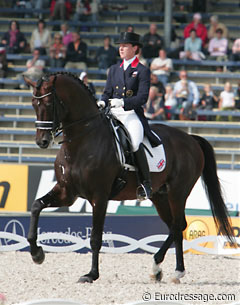 The trot tour was in total relaxation, the horse was nicely on the bit with the right length in his neck. He swung from the extended trot into the half passes and back into the extended trot. The piaffe and passage kept rhythm, although the passage could have been a bit more powerful and pushing from behind. A mistake in the single tempi changes kept the score from climbing any higher than 70.458%

An interesting moment in the prize giving ceremony. While all photographers were lined up to take that ultimate victory gallop shot of the German team, a horse and ride flew by. Looking away from the lens we spotted Salinero on the run with Anky van Grunsven. The gelding spooked and had taken off and there was no stopping to him, not even a double Olympic champion could curb the instinct of this animal. She shouted "help" and had to steer Salinero into two police horses to bring him to a stop. It was a very scary sight and even Anky held her heart there. At the press conference she said "Salinero really got scared in the prize giving and I did as well. I did the fastest trip today," she joked.