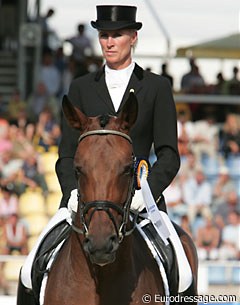 German Grand Prix rider Brigitte Wittig is also on a young horse medal course. Last year she won bronze on Baldessarini W, this year on Biagotti W. All of Wittig's youngsters are home bred and are by Breitling W, a Hanoverian stallion by Bismarck

, that was bred by Brigitte's father. The Oldenburg branded mare Biagotti W is out of a Diego xx dam.

Wittig and Biagotti W had to work their way up into the finals via the consolation finals. In the first round the mare was a bit underscored with her 7.44 overall mark, though there were mistakes in the test. The trot was nicely collected and uphill, but a bit hasty. The first flying change was croupe high, the second ok but stressy. The haste was gone in the consolation finals and she won it with 8.5. 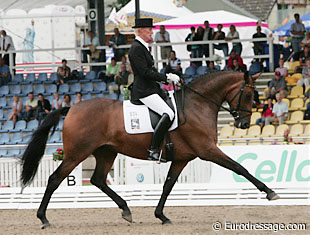 In the finals, Biagotti W gave a very, very confirmed impression. The mare was totally collected and together, showing fantastic engagement in all three gaits. In the extended trot the left front leg extends more than the right, the walk was good, the canter work as well, in which the collecting from extended canter to collected canter showed such a degree of collection not normal for a 6-year old. Biagotti W looks like a fully confirmed Prix St Georges horse at age 6. Such confidence in the flying changes, such ability to sit and take the weight on the hind legs. Honestly, it was bit too much. Nevertheless, the 8.72 overall score gave her the bronze.