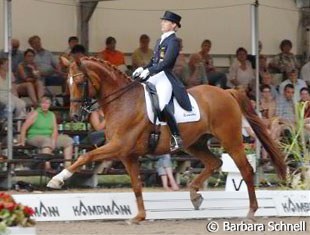 The weekend of the 2006 German Dressage Championships in Munster has been one big roller coaster ride. Ann Kathrin Linsenhoff scored only 60.33% in the Grand Prix as her Sterntaler saw a ghost in the corner at H and refused to go through it the entire ride.

Martin Schaudt and Weltall VA are no longer up for selected for the German WEG team as Weltall VA was unable to compete in Munster due to lameness. Furthermore, Schaudt's partner Nadine Capellmann announced that she has decided no longer to use Schaudt as her trainer.

Capellmann decided to stop the training partnership with Schaudt as she believes the pair can not find a consensus on how to train Elvis VA. "We came to the conclusion that at this moment we can not agree on a training system," Capellmann said. "Holger Schmezer has been helping me in Munster and I have refound my style."