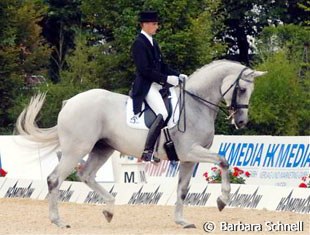 Andreas Helgstrand and Matine, the most promising pair of the year together with Nadine Capellmann and Elvis, dominated the 2006 CDI Lingen by winning the Grand Prix and finishing second in the Special.

Helgstrand and Matine had some glitches in their test, especially towards the end, but this seems to be a lack of routine and general fitness. Look at the marks on the score board. Matine gets consistent 10s for her piaffe and passage, though some judges value those movements with a seven. Quite a big difference between 10 and 7! The Danish duo won the Special tour with 76.33 % in the Grand Prix and placed second in the Special with 74,48 %

The Kur tour was dominated by Nadine Capellmann and her rising star Elvis VA (by Espri) who is currently Germany's highest scoring horse.

Anky van Grunsven competed in Germany, despite her stating she "doesn't feel like going there." At Lingen she put down professional rides aboard Krack C (left) and her rising Grand Prix horse Painted Black. Salinero (right) was also in Lingen, but just for training. On Sunday Anky gave a short 15 minute demonstration. 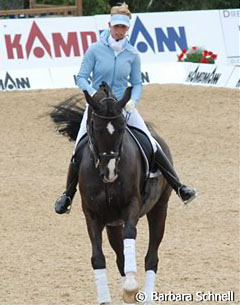 Anky did the demonstration with a lot of self-deprecating charme ("riding and talking, my favorite pasttimes ; it's just so difficult to do both at once"). She thanked the organizers of the event for this chance to be there and show -- not tell -- how she works. One could still find her training techniques unconvincing, but her performance was absolutely disarming. Hats off.

Isabell Werth showed her her temperamental Satchmo. The bay Hanoverian lost it, briefly, in the transition from the passage to the first piaffe, but Isabell got him under control again, and they did okay. Look at her body language when she leaves the arena -- she can take a
non-perfect test with good grace.

Prints of Barbara's Lingen photos can be ordered via her website. Email Barbara if you want to buy photos for editorial or personal use.