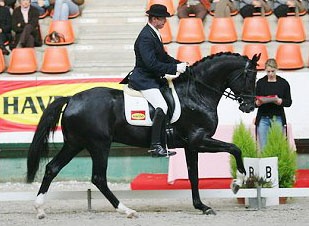 The Belgian Equestrian Federation and Belgian Dressage Committee have selected the combinations that will represent Belgium at the 2006 World Championships for Young Dressage Horses in Verden, Germany, August 3-6, 2006.

Based on their superior performances at the first four Cup of Belgium FEI Young Horse Shows hosted throughout Belgium, the following horses have been selected to compete in Verden.

At the 2005 World Championships for Young Dressage Horses, three out of four Belgian combinations were able to qualify for the individual finals in Verden. That is a success rate of 75% which no other country (not even Germany, nor Holland) was able to achieve at the World Championships. This should have earned Belgium the right to send more than two horses per age class to this year's World Championships!