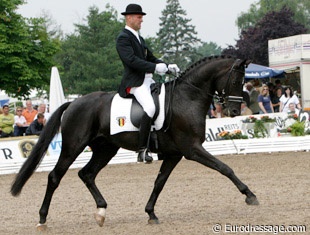 only today after a firm complaint from Eurodressage.com.

If a Belgian rider wishes to qualify for the 2006 World Championships in Verden he will need to fulfil the following criteria: "The first four competitions of the Cup of Belgium for Young Dressage Horses (CDN Flemalle, Moorsele, Schilde and Dendermonde) count as selection trials for the World Championships. The overall three best placing horses in the 5 and 6-year old division will qualify for Verden." This has been decided by the Belgian Dressage Committee in board meetings held on March 22, 2006 and April 19, 2006.

Now, the rotten part about it all is that this change in qualification criteria -- last year the horses were selected based on one special qualification show -- has not yet been published anywhere!! Only today, after the complaint by Eurodressage, did the VLP post the news on their website. These criteria should have been posted months ago (in April) in the VLP info magazine and should have been announced on the websites of the VLP and KBRSF right after the board meetings.

The fact that the Dressage Committee decided to change the qualification procedure from one qualification show to a series of four shows part of the Cup of Belgium (due to complaints last year) is not a problem to any rider, but the fact that all riders were kept in oblivion about the criteria is despicable!

Year after year the Belgian Equestrian Federation has been succeeding in malinforming or, better say, "not informing" its paying members of the rules and regulations for competitions.

Last year the federation did not announce that there was a qualification show, but the news was just spread word of mouth to a few riders. Fortunately, the news did get posted on several websites which made sure that more riders entered the show. This year the committee has done it again to make the entire WCYH Selection Trial a big hush hush operation.

Belgian riders be aware now that you have to enter your young horses for the final selection trial in CDN Dendermonde if you want to qualify for Verden. It'll be the only and final show you are able to enter, as the entries for the CDN Schilde have already closed!!