Wayne Channon and Lorenzo In Command at CDI-W Lipica 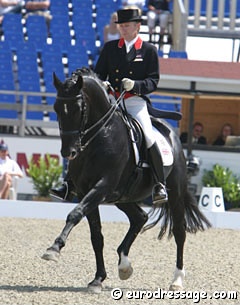 British world class performance rider Wayne Channon became the undisputed winner of the World Cup Qualifier in Lipica, Slovenia. Aboard his KWPN stallion Lorenzo CH, Channon topped the leader board in both the Grand Prix and Grand Prix Kur to Music

and was in command of a field of thirty international competitors.

Channon and Lorenzo CH (Ferro x Wolfgang) scored a winning 70.125% in the Grand Prix after a virtually fault-free ride. The highlight of their test was Lorenzo’s trademark piaffe and passage, for which they received 8s and 9s. In the Kur to Music, the combination shifted into a higher gear and aced the field with an impressive 75.000%. They performed their unique Slings & Kerkhof composed freestyle “Il Passeggiato,” which earned them a 9 for their music.

Channon had a great feeling on his horse in both rides. “I started out carefully, but once Lorenzo settled into the test, I found that there was plenty more left in the tank and turned the engine up a bit. He wasn’t tired at all at the end of the ride. It was superb,” said an ecstatic Channon.

By winning the kur, Channon has gathered a maximum amount of World Cup points which puts him up in the provisional ranking to qualify for the 2007 World Cup Finals hosted in Las Vegas, U.S.A. However, his main focus at the moment is fine tuning Lorenzo CH for the 2006 World Equestrian Games in Aachen, Germany, in August. He has check-marked the three-star CDI’s of Brno, Vierzon and Pompadour ‘en route’ to Aachen.

“The World Equestrian Games are the highlight of the season for every international rider. Lorenzo is in top shape and I feel I will be able the get the power up even more in the future. My aim is to peak at WEG,” Channon explained.