Santana and Tellwell On their Way to Verden 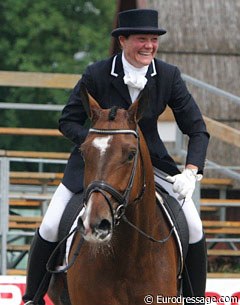 On Tursday May 30, 2006, the Swedish warmblood society and Swedish Equestrian Federation held their first selection trial for the 2006 World Young Horse Championships in Verden.

The trial was organized at the Kastanjegården in Flyinge and Annette Fransén-Iacobaeus and Bo Jenå were the selectors.

At the trials, three combinations earned their ticket for the Championships in Verden, but there will be one last selection trial at Falsterbo before the final nomination of the combinations.

Seven combinations presented themselves in the 5-year old division and the highest points went to Minna Telde aboard Santana, and Anna Svanberg aboard Hermes. Telde scored 8.3 on her Sandro Hit x Rubinstein licensed stallion, while Svanberg received 8.26 for her ride on the Rambo x Urbino offspring. These two horses stood out distinctively in the field of seven, as the other horses did not have show enough basic gaits to score high points.

High scorer in the 6-year old division was Birgitta Kjellin on Telwell, a Tip Top x Bayard son, who already competed at the 2005 World Young Horse Championships. At Flyinge, Kjellin scored 8.29 with him and beat Britt-Marie Henningsson Ivarsson on Bomerang (Bolero x Anart), who scored 7.96. The third place rider was Anne Svanberg on Hermes' full sister Gicea (Rambo x Urbino). They got 7.7 from the panel of judges.