Hughes and Gould In Command at 2006 British Winter Championships 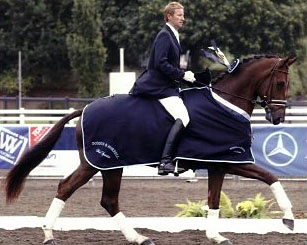 Andrew Gould and Gareth Hughes have shown to be in command over their competitors at the 2006 British Dressage Winter Championships, sponsored by Horse and Hound.

“ It's been a long old wait to get another title,” said Andrew. “Numero Uno's a big horse (18hh) and takes some balancing. Last year he was still quite weak, but is now much more established," Gould told Horse and Hound.