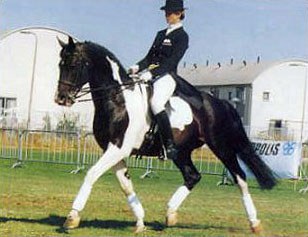 The KWPN breeding stallion Samber celebrated his 30th birthday on April 2, 2006. He is the oldest still breeding sire for the KWPN studbook. Samber is most renowned for his brown tobiano coat and is the only coloured sport horse licensed with the KWPN studbook.

Born in 1976, Samber is bred by Mr Smilda from Roderwolde (NED) and stationed at Vrieling's station in Coevorden. He is by Pericles xx out of Tina D (by Ordonnans x Romeo). In 1979 he passed his 100-Day Performance test scoring a 10 for character and temperament. With an overall of 160.2 points, he gained an A Certificate.

Since 1979, Samber has been covering mares and his breeding numbers have varied between 55 and 180 per season. At age 30, his semen is still of good quality, though it has never been suitable for chilling or freezing. All mares bred to Samber have been inseminated with fresh semen or via natural service.