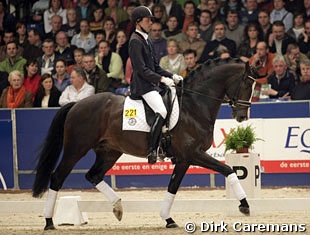 Uptown, Tolando and Florencio have won the 2006 KWPN/KNHS Stallion Competition Finals which were held at the 2006 KWPN Stallion Licensing in 's Hertogenbosch, The Netherlands. Hans Peter Minderhoud rode all three winning horses.

At L-level, the former KWPN Stallion Licensing Champion Uptown was the undisputed winner of the finals. With his lightfooted trot and ground covering canter, Uptown (Kennedy x Ubis) dazzled the crowds and judges and became the overall winner. Edward Gal and United finished in second place. This combination is quite new obvious from several communication slips in their ride. United was often too tight in the neck and did not display enough willingness to go forward. Emmelie Scholtens and Uphill placed third.

The horse that has dominated all stallion competition qualifiers at M-level was the Oldenburg bred Dream Catcher (by Day Dream) but because the dark bay stallion is not yet fully licensed with the KWPN, he was not allowed to compete in the finals. These were won in the overall ranking by Minderhoud aboard Tolando (by Krack C), despite Trento B (by Krack C) winning the class in 's Hertogenbosch. Yvonne Copal and Tuschinski (by Krack C) ranked third.

The Westfalian Florencio (Florestan x Weltmeyer) who is approved for the KWPN was the undefeated champion at ZZ-level. Florencio won all qualifiers and received a monster score in Den Bosch, scoring 9.5 for trot and canter and accumulating 667 points in total in the overall ranking. "Florencio links beauty to power, suppleness and athletic potential," judge Wim Ernes said. Diederik van Silfhout finished in second place with Special D (by Metall) and third with Riverman (Kenwood x Voltaire).