Argentinus, Hanoverian Stallion of the Year 2005 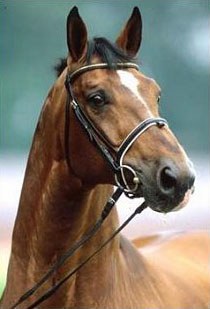 Privately owned stallion Argentinus is the Hanoverian Stallion of the Year 2005. The Argentan x Duden II-son is a first-class breeding stallion with an international reputation and well-known beyond Lower Saxony borders.

His offspring are not only successful jumpers, but also excellent dressage horses. On behalf of the deceased breeder, his daughter Jutta Hagner was awarded the Wohlklang-statuette and the remunerative cheque.

On February 15, 1980, Argentinus was born on the farm of Jacob Büther in Hollern-Twielenfleth. With his sire Argentan, the Hanoverian Stallion of the Year 1994, and his dam’s sire Duden II, he carries valuable and successful Hanoverian bloodlines. His breeder sold the modern, bay colt to Jan Munderloh and Kurt Meiners, Elsfleth. 23 years ago, Heinrich Klatte discovered him there and bought him for his stallion station in Klein Roascharden near Oldenburg where top-class stallion Grannus was stationed as well. Argentinus passed his stallion performance test in Adelheidsdorf and ranked third with totally 126 points. He was licensed in Verden in the same year. From totally 548 registered offspring, 15 daughters were awarded state premium mare. Seven of his sons are registered Hanoverian breeding stallions, among them the former Federal Champion of German Dressage Horses, A Jungle Prince, as well as Adlantus As FRH who competed under Lars Nieberg for the German team at the last World Equestrian Games in Spain.

His offspring in sport count among the best ones worldwide. Their lifetime earnings have been exceeding the two-million-limit. Two years ago, the Oldenburg mare Anka won the Jumper’s World Cup under Marcus Ehning. In 2001, Albano and Heike Kemmer became Team European Dressage Champions. Other famous dressage offspring by Argentinus are the Grand Prix horses Aleppo OLD, August der Starke and Amaretto. Right from the very beginning, the stallion was one of the most important stallions registered for the Hanoverian Breeding Program for Show Jumpers.

Argentinus also enjoys an excellent reputation as supplier of Verden auction horses. 16 foals were sold in Verden, 20 riding horses at elite auctions and eight offspring at other sales events. At the Elite Foal Auction in 2003, All Star ZH achieved the sensational price of Euro 60,000,. At the 109th Elite Autumn Auction two months later, the lot went down at Euro 65,000 for the four-year-old Almost Famous.