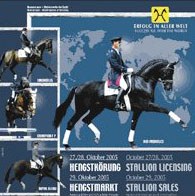 Astronomical prices were paid for the 2,5 year old colts at the auction following the 2005 Hanoverian Stallion Licensing in Verden, Germany. An absolute all-time record price of 800,000 euro was paid for the licensing champion by the syndicate

Schockemohle and Blue Hors had more cash to spend and invested into the reserve champion of the licensing as well. They bought the black Prince Thatch xx x Wenzel I offspring for 580,000 euro.