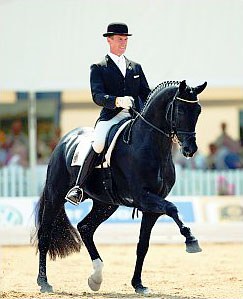 Uproar in the breeding (and dressage) world! Furst Heinrich, one of the most popular and most promising young breeding stallions has died unexpectedly at a clinic in Germany.

Furst Heinrich is owned by Gestut Sprehe in Loningen, Germany, but Sprehe was unwilling to give information on the untimely passing of this stallion. "I can only confirm that he passed away at the clinic, but I am not allowed to tell you more," Gestut Sprehe told Eurodressage.

Sprehe did not want to share any information about the cause of death of their horse, nor the location of the clinic. "We are investigating his death and I would like to say that everyone at Sprehe is extremely upset about it, including the family." Sprehe will release an official statement on the passing of Furst Heinrich tomorrow.

Furst Heinrich was a 7-year old Westphalian bred stallion by Florestan I out of Dawina (by Donnerhall x Weinberg). He was bred by Heinrich Ramsbrock from Menslage, Germany. As a two-year old, Furst Heinrich was presented at the 2000 Westfalian stallion licensing and became a premium stallion. Gestut Sprehe purchased the black stallion in the after-sales.

This Article is once again a Eurodressage Exclusive - reproduction not allowed
Photo courtesy: Gestut Sprehe