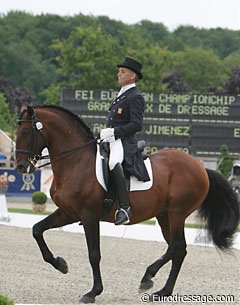 The Thirty-Fourth National Dressage Championships in Spain were held September 8-11 in the pastoral village of Castro del Rio, in the heart of the olive growing region surrounding Cordoba.

The site was selected to honor Juan Antonio Jimenez, multiple Spanish team member and leading Spanish competitor at this year’s European Dressage Championships, who grew up in this Andalucian village.

Thousands of enthusiastic fans attended the three day event, which included the Intermediate I championships as well. Missing from the line-up were Rafael Soto and Invasor, who were also absent at the European Championships due to a shoeing-related lameness. Beatriz Ferrar Salat also did not compete at the Grand Prix with Beauvalais, as in other years, but showcased her new warmblood mount, Faberge, at the I-I.

The winners of the Grand Prix, as expected, were the hometown favorites, Jimenez and Guizo, whose presentation and abilities reflected years of successful international Grand Prix competition. There were, however, many exciting up-and-coming riders and horses that made the weekend an exhilarating display of the highest level of dressage performance.

This open competition included all breeds, and about half of the I-I horses were warmbloods, while the Grand Prix was dominated by Pure Spanish (PRE) or Iberian-blood horses. A parent of one of the I-I competitors, when asked about the higher number of Northern breed horses in the I-I, explained that the reason for this was due to cost: a Pure Spanish horse with Grand Prix potential is much more expensive than its warmblood counterparts, and thus the lower levels often field a higher number of Northern European breeds. 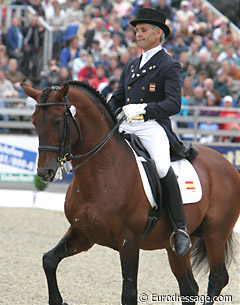 The Spanish horses presented at the Grand Prix were of excellent quality, baroque in type with size and substance, and notable athleticism. A forward, animated trot was standard, including the ability to extend to varying degrees. The walk in the upper level Spanish horses was adequate, while rarely exhibiting something as extravagant as a warmblood walk can be (with the exception of Guizo, who may have the sexiest walk in the international arena today!). The canter work varied from horse to horse, ranging from outstanding to moderate, as one might see in any Grand Prix championship class. The piaffe and passage work, however, was exceptional, consistent and often mind-blowing. Where the Spanish could improve in general is in their training of the extended trot and, in some cases, in the selection of music for the Kur, but they hands-down are superior in their training and execution of a piaffe and passage that is both classically correct and competitively exhilarating.

The top five placements at the I-I included four warmbloods and one PRE. Most notable were Rafael Murga on Palisander and Chloe Morris on Zorro Z, who took first and second places, and fourth place Fuego XII, whose test was powerful and accurate. Beatriz Ferrar-Salat, on her young and handsome new horse, struggled through the first of the I-I tests, finishing with a 60.3 after many mistakes. The horse, however, shows great potential and character. A big black, with white markings, Faberge is very much the modern type of warmblood that is exemplified by Anky Van Grusvenen’s Salinero—more baroque in type with greater knee action and somewhat shorter-coupled than warmblood breeds have been in the past. Ferrar-Salat and Faberge did not qualify for the Kur, but the pair presented a picture of a promising future.

In the Grand Prix, there were a number of exciting riders and horses for the Spanish. The intial test, the Grand Prix B, fielded 17 horses, and all moved on to the Special, following which the top twelve proceeded to the Kur. Jimenez, coached by Olympic team coach Jan Bemelmans, rode a strong B test finishing with a 72.25, and a slightly weaker Special with a 70.48. It appeared that Guizo, who is a particularly electric and animated competitor, lost some rhythm in the piaffe and straightness in the tempis under the lights on Saturday night at the Special. The two were back in their best form on Sunday afternoon, where they performed a brilliant Kur that brought a 75.65 and the gold medal for the competition. After watching the ride, it was easy to see how the pair did so well at the European Championships this summer, where they finished fourth in the Kur and Fifth overall. The pair’s signature movement in the Kur is the canter to piaffe, both at half-pass and extended canter. Guizo’s range of ability included the triple pirouette and a passage that redefines the concept of “coming under”. The pair are so well-matched, both rider and horse being small and refined, and the harmony and communication between the two are seamless. Guizo’s light and snappy execution of movements that larger, heavier horses have to perform with a greater show of effort, brings a refreshing alternative to the out-sized horse in the ring. 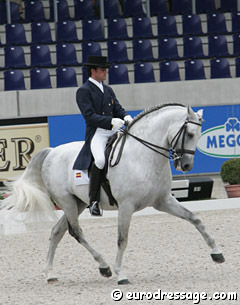 The position of second place was hotly contested by Rafael Soto’s student Jose Antonio Garcia Mena on Osado and Eva Maria Navarro on Cristiano, a Hispano-Arab that she personally bred and trained to Grand Prix. A beautiful rider, Navarro rode a very clean test with no single outstanding movement but with regularity and precision throughout. She maintained a second place position until the Freestyle, which demanded more expression than her horse could produce.

She was outscored by Jose Garcia, who made the controversial choice of using Soto’s music and choreography for the test (albeit with his coach’s permission). Response following the show was generally negative to Garcia’s “borrowed” test, however the judges rewarded him with a 71.45, which guaranteed his second place position overall with 67.25 and bumped Navarro to third with 66.94.

Another important horse to watch for in the future is Selecto II, ridden by Victor Alvarez. This pair has been quietly coming up the ranks in Spain, as they have also been garnering experience at international shows. Following a good showing in the CDI’s at the Sunshine Tour in February, this summer they won the I-II in Barzago, Italy, and were thirteenth and third at the Grand Prix and the Grand Prix Kur in Lisbon, respectively. This large bay is still a bit green and was occasionally irregular in the passage, but he can do it all, with an exceptional walk and canter to add to a trot that extends and collects with ease. In this writer’s opinion, a shorter warm-up would have given the horse a more energetic finish to the Special, however the Freestyle was consistent and enjoyable. The pair earned a 68.08 at the Kur and finished fourth overall with a 65.78. 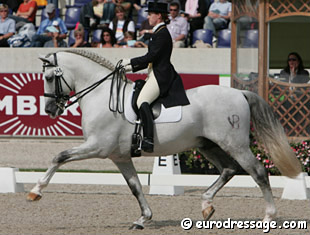 Other highlights of the competition include seventh-place Jose Manuel Lucena, who was coached in the warm-up in English by Dutch trainer Henk Van Bergen. His choice of music for the Kur was the Mission Impossible theme, which was very effective with his big-moving grey horse Rondeno. Teresa Jauquicoa pulled off an impressive ride on Impaciente, after a distracting start. Jauquicoa is a student of Ferrar-Salat, and needs to work harder to imitate her teacher’s quiet position. Her young horse shows super potential in the Grand Prix and this pair will continue to improve. They finished in sixth place overall. Remigius, a Westfalian warmblood ridden by Borja Carrascosa, displayed a regular passage and gorgeous ones, but couldn’t compete in the piaffe and the pair finished ninth.

On Saturday night, following the Special, a dinner to honor the various international dressage teams was held under the trees and sparkling lights of a private courtyard near the showgrounds. The entire team from the past year, except Soto, was there to be honored for their various victories in the international arenas—including last summer’s Silver Medal at the Olympics and the Bronze Medal at this year’s European Championships, as well as several individual championships by team members and Young Riders. The Orquestra de Plectro de Cordoba performed a full concert, featuring music from Spanish composers from traditional Andalucian folk songs and dances, to classical sinfonias and selections from Carmen. The elegance of the event, highlighted by the music of centuries of tradition, provided a context to the entire weekend and gave us a glimpse of the esteem that this country gives to its riders and its horses. The Campeonato is a rich tradition that is producing internationally important riders and trends in riding that have already begun to change the face of dressage.