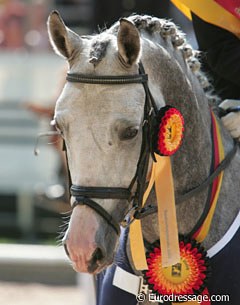 Katharina Winkelhues on Valido's Contrast: He was the champion last year and he made a big impression this year by beating the 2005 European Pony Champion Deinhard B. Valido's Contrast is super uphill

, has the most gorgeous top line, and three outstanding gaits, but under Katharina Winkelhues he didn't put down an 9 point earning ride. He was tense in the walk and canter work, which caused some disruptancies in the general flow of the test. Nevertheless, it was a good ride full of potential for the future.

Anna von Negri on Deinhard B: They were 2005 European Pony Champions with 75% + scores, but they couldn't make it all the way at the Bundeschampionate. Deinhard B is a beautiful pony stallions with pure quality gaits, but he was griding his teeth throughout the ride, and the walk was tense. In the counter canter, Deinhard B made a flying change and that's probably where he lost his Bundeschampionate victory.

Kaja Schafer and Charlett W: Kaja Schafer was member of this year's gold medal winning German team at the European Championships with her pony Golden Derano C, but at the Bundeschampionate she was riding Mrs Rothenberger's Charlett W. The chestnut mare has a lovely self carriage and stays nicely on the bit during the whole test. She has very functional, well regulated gaits though could have a bit more bounce of the ground. She finished third.