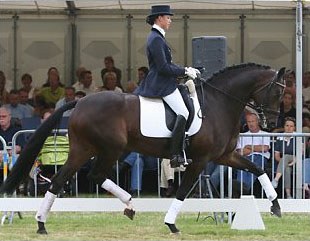 She has done it again! Poetin, the 2003 World Young Horse Dressage Champion and double Bundeschampion, has sold for a record price at an auction. The dark bay Brandenburger mare sold for 900,000 euro at the executorial auction hosted by Cees Lubbers due to a financial dispute between Poetin's owners Peter and Patty van der Zwan of stable De Keizershoeve in Kessel, The Netherlands, and the ING bank.

The executorial auction took place at Estate Balkenschoten in Nijkerk, The Netherlands. 28 horses were included in the auction collection, but as soon as the amount of 1 million euro was reached the auction was stopped (after the sale of Poetin). The yearlings, two year olds, riding horses, and mares and foals, which were of good and high quality, sold for prices approximately between 5,000 and 51,000 euro. The KWPN licensed stallion Troy (Negro x Glendale) did not get sold.

The auction really got on a roll when A Special Poetin, the black embryo transfer filly by Jazz out of Poetin, appeared in the ring. The filly, who is beautiful in model, but who has no gaits whatsoever, sold for 138,000 euro to Paul Schockemohle in Germany. Dutch horse dealer Eugene Reesink bid on the foal on the phone with Schockemohle and purchased this filly, who is world class on paper, for a record price. This amount of money has never been paid before for a warmblood foal at an auction.

The highlight of the day was of course the sale of Poetin. The champion mare was found by the police on August 25, 2005, at the equine clinic in Kerken, where she was 'officially' being treated for an 'irritation of the right front tendon sheeth'. Poetin appeared in the ring under Mss Kwakkel and the mare had not lost a bit of brilliance. Her trot was as breath taking as two years before, her canter work was solid with super flying changes and her walk could have been better, but was still good enough. The mare did look a bit tender on the legs, though, especially in the walk.

The bidding took a slow start, but got going really well after a couple of hundred thousand euro's. German horse dealer Norbert van Laak was bidding for a client but stopped at 400,000 euro. German Grand Prix rider Gina Capellmann Lutkemeier stopped at 700,000 euro, the Reesink/Schockemohle duo stopped at 880,000 euro and the mare sold for 900,000 euro to a middle aged lady sitting in the middle of the VIP tent.

So far, the identity of this lady has not been confirmed, only that she did in fact pay the amount of money. The auction was stopped to get confirmation from the bank that the amount of 900,000 euro was wired to Cees Lubbers Auctioneers. It has been speculated that she is Swiss and that the mare will move to France for training or breeding. We'll know more tomorrow, so tune into Eurodressage for more news.