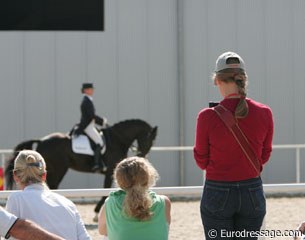 Since the 2005 European Dressage Championships, there seems to be happening only one thing in the dressage world: theholy crusade of Dutch chef d'Equipe Sjef Janssen against the German magazine St Georg. The magazine published photos of Anky schooling her horses in the rollkur and in the accompanying article St Georg  complained about the rollkur and other training methods they consider abusive and which, according to them, are much used by certain Dutch and German riders. Janssen went to court to sue St Georg and made sure the magazine will be fined 250,000 euro if they link a photo of Van Grunsven to any text about abuse in the dressage ring in the future. It is not the first time that Janssen has been carrying out witch hunts against press that showed "negative tendencies" towards the rollkur and Janssen's training technique or that just featured Anky on a video tape (for instance Kyra Beth Houston's CDIO Aachen video tapes). Janssen states that Anky's face is copyrighted and one can not publish, print, or videotape it without his explicit permission.
(An English translation of the "Dressur Pervers" article is posted on the Chronicle of the Horse Bulletin board )

A small incident took place last week at the 2005 CDIO Aachen where a young girl was videotaping Anky's warm up. Anky stopped in front of the girl, asking for what purpose the girl was taping her. The young Hungarian girl (who is an international rider herself) said it was for personal use. Anky replied "only if you use it in a positive way, you can videotape."

Janssen's crusade and the (legal) counter-strike by the press has not yet come to an end. In her article "Who's Responsible for Maintaining the Classical Principles of Dressage?" in The Chronicle of the Horse, Birgit Popp replied to the "Dressur Pervers" story by stating that "for two decades, it was only a whisper, but not anymore thanks to an article in St Georg. [...] These articles have brought into the open a debate about the training of dressage horses, especially by some of the sport’s top riders and their trainers. These articles allege that some, including Olympic gold medallist Anky van Grunsven and husband/trainer Sjef Jansen, are sacrificing the principles of classical dressage training for blue ribbons and medals." (The complete Chronicle article can be viewed here).

In his most recent editorial, Chris Hector, editor in chief of the Australian The Horse Magazine, wrote skeptically about the issue that not only trainers but also judges and officials from the dressage world are trying to shut up the press by ordering them to refrain from criticizing the sport ("because it affects the positive image of dressage"). Hector will discuss the political censorship that seems to come from upper hand with the International Alliance of Equestrian Journalists (IAEJ). We'll keep you posted on the development of this matter..

Birgit Popp points the finger at the judges, and Eurodressage concurs with her opinion. The past year, the judges have been showing too many discrepancies in their judging system by giving high marks to movements which are not according to the classical principles, such as a super electric piaffe/passage which is spectacular, but shows a horse full of tension and not pole high. Errors in flying changes get marks between 3 and 7 even when they occur right in front of the judges' box. It are the judges who set the standard for dressage and they have to indicate where the future of the sport lies. They can make sure that it's no longer the "End that Justifies the Means" in this sport, but the other way round.

We'll keep you updated on this complex topic...

Now back to business..

The identity of the new owner of Poetin has been confirmed. Xavier Marie from Nantes, France, purchased the Brandenburg mare. Marie is a regular customer at the Elite Auctions in Vechta and Munster and has been systematically buying the best foals and young horses at these auctions. He also bid on Poetin's foal "A Special Poetin", but stopped at 125,000 euro. For Poetin, he went all the way and paid 900,000 euro knock down price, plus 25% auction and VAT fees.

German chef d'Equipe Holger Schmezer and his wife Martha became the proudparents of a daughter. They have named their child Ulonka.

The 7-year old Oldenburg chestnut gelding Bogner B has been sold to Irwin LePowfrom Virginia. Ulla Salzgeber sold her upcoming Prix St Georges to LePow one month ago. Bogner B won the Oldenburg Regional Championships as a three year old and qualified for the Bundeschampionate as a six year old. Bogner B is by Bonheur x Inschallah AA.

And in Holland Most Wanted (Cabochon x Octrooi) sold. The 11-year old KWPN registered horse has been competed at Prix St Georges level by owner/rider Christa Laarakkers. Most Wanted sold to a young rider in The States.

The German sport pony stallion Power and Paint (by Power Boy x Dancer) has got a new rider. His current rider, the 16-year old Mara de Vries, is moving on to horses next year and has passed on the buckskin pony stallion to another student of Coby van Baalen. The 13-year old Angela Krooswijk will be riding and competing Power in the future. Power and Paint is owned by the German Pasch family who keeps the pony in training with Coby.

Jürgen Britsch received the 2005 Silver Camera Award for the best equestrian sport photo of the year during the Media Night at the CHIO Aachen. According to the judges of the Silver Camera award, the winning picture "perfectly illustrates the energy of four-in-hand driving, with a carriage crossing the water at full speed during a marathon." Britsch, 42, is a sports photographer who has worked for the Baumann agency for more than 10 years. It was not the first photo award for the German photographer specialized in equestrian sport, as he also won the Fujifilm Euro Press Award in 2002 with a stunning picture of tennis player Max Mirnyi.

According to Horses of the Dutch, the KWPN licensed stallion Argus (who was put on hold by the KWPN verband) passed away last weekend. The stallion by Pion x Jasper was stationed in The Netherlands at Stoeterij 't Vierspan, but sold to Canada a couple of years ago. The black stallion was currently owned by American Lori Skrip. Argus died of a heart attack.

Sometimes you just read the funniest things on the equestrian bulletin boards online. Recently, one thread just cracked me up. The subject line was "Anybody else feel like a Thelwell cartoon today?" The poster 'War Admiral' made the hillarious comment, "Lord, this heat and humidity!! I just got back from the barn, where I left two well-worked, bathed, massaged, carrotted, pepperminted, cool, comfy, *immaculate* horses. I am now dripping in sweat, covered with mud, clothes soaked through w/ sweat, mud and Vetrolin, and quite honestly I stink!!" You go Girl!

We heard more great stories recently. Runaway (Rasputin x Moltke I x Colonel) was a Grand Prix jumper until the age of 18 years. He was born in Germany and sold to the States as a youngster. When he arrived in the U.S.A more than 20 years ago, he had to go into quarantaine in Los Angeles. "The quarantine station near the airport had small paddocks for horses and a big wire fence around the whole complex. When Runaway went in the small paddock he jumped out right away and then jumped over the wire fence, almost 2 meters tall! Then he ran through the streets of the city until he came to the beach at the Pacific Ocean. More than 30 firemen were on the beach to catch him," his owner told Eurodressage. Unfortunately, the now 27-year old Runaway has been put down in July due to old age.