Poetin Found and to Be Auctioned by Cees Lubbers 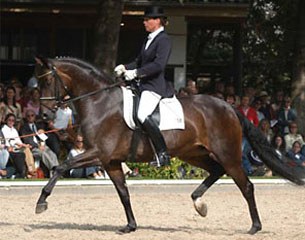 The 2003 World Young Horse Dressage Champion and Bundeschampion Poetin has been found by the police in Germany and will be auctioned by Cees Lubbers Auctioneers on September 1, 2005.

The 8-year old Brandenburg mare Poetin, who sold for the record price of 2.5 million euro at the 2003 PSI Auction, was hidden by her owners in order to prevent the mare from being sold in this executorial auction. The Dutch federal police and several detectives were looking for the mare and have found her in Germany. The retrieval of Poetin means that the mare will be added to the auction collection.