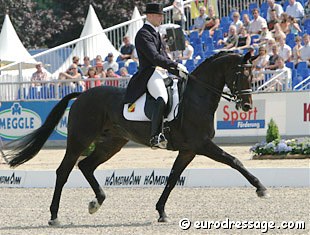 If there is one federation who excels at sabotaging its own dressage riders, it must be the Belgian Equestrian Federation (KBRSF). For the first time in many years (or ever), two Belgian Grand Prix riders have received the privelege of competing at the CDIO Aachen.

However, with much "diplomacy" and "intellect" the KBRSF notified Aachen director Frank Kemperman, by letter, that there is no need for him to make the effort of inviting any Belgian dressage rider, because they have to compete at the 2005 Belgian Dressage Championships.

The world's most prestigeous and exclusive equestrian competition of the year is, without a doubt, the CHIO Aachen. For any dressage rider, competing at Aachen is like a dream come true; it is the fulfilment of a life goal. Based on their good achievements in the Grand Prix ring this year, Jeroen Devroe and Mieke Lunskens would be invited by Kemperman for the show.

Unfortunately, the Belgian Equestrian Federation considers it more important for Devroe and Lunskens to compete at the 2005 Belgian Dressage Championships in Wiekevorst (which coincide with Aachen), as the organisation is desperately in need of three Grand Prix riders if they want to have a senior Championship.

Belgian Championship organizer Wim Verwimp, an international dressage rider himself, told Eurodressage he was unaware of the fact that the federation sent this letter. "I honestly didn't know they did that," he said. "The date for the Belgian Championships was set in July 2004, before Aachen decided to move the CHIO from June to August, so it's not our fault that it coincides." Verwimp showed sympathy for Devroe and Lunskens and said that if he were to compete himself, he would also chose Aachen to the Belgian Championships.

By declining an invitation from Aachen, the KBRSF has once again given proof of its shortsightedness, egocentrity and incompetence. Maybe next year they can organize the Belgian Championships at the same time as the 2006 World Equestrian Games?!

Back to the 2005 CDIO Aachen Index