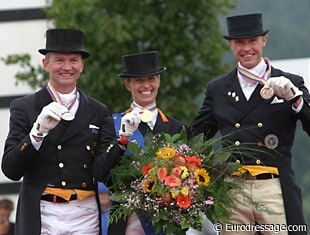 Anky van Grunsven has reclaimed the European Champion's title at the 2005 European Dressage Championships in Hagen, Germany, after having been without one for five years. In 1999 Anky was crowned European Champion on home turf in Arnheim, this year she ruled in the lion's den, Germany.

Aboard her 11-year old Hanoverian gelding Salinero (by Salieri x Lungau) she won all three tests of the individual championship and claimed the individual gold medal. German Hubertus Schmidt won the silver and Swedish Jan Brink got bronze.

Though Anky scored 77.417% in the Grand Prix, 76.160% in the Special and 83.000% in the Kur, her overall victory was not a walk in the park. Her temperamental Salinero required all of Anky's riding skills in order to keep the lid on the cooker.

In the Grand Prix, Salinero did an immobile halt at the beginning -- which is an improvement -- but at the end he still piaffed his way through it. The piaffe-passage looked gorgeous. It was electric, engaged, and suspended. The first pirouette was good, the second could have been more round the leg. Mesmerized by the strong piaffe-passage tour, the judges closed their eyes for a mistake in the single tempi's and still scored the movements with 6's and 7's, while other, less famous riders get 4's for such mistake. Albeit, Anky's 77.417% put her well ahead of second placed Hubertus Schmidt on Wansuela Suerte (74.625%).

In the Special, the lid did blow off the cooker. Salinero was tense from the start. The moment the bell ring, he galoped off alongside the ring. Anky got him collected in time to enter the ring. In the entire trot tour, the contact with the bit was strong and one was secretly wondering how Salinero would react to an uberstreichen in such moments. The passage, which was so spectacularly electric, was a piaffe barely moving forward. A kick to the spur at the transition from passage to canter proved the tension was still there. The flying changes every two strides went completely wrong with two major errors on the diagonal. Mariette Withages still scored it a 5, while Cara Whitham correctly gave it a 2. Anky and Salinero scored a more than generous 76.160% for a tension filled Special. 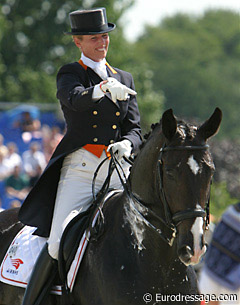 "He was a little too fresh and really nervous in the ring," Van Grunsven said in the press conference. "He took off when the bell rang. It wasn't an easy ride for me," she admitted. "He's still an unbelievable horse. He still wanted to go and settled down during the exercises," she explained.

In the Kur to Music, Salinero was completely transformed. Maybe the rain dampered his spirit, but Salinero was much more harmonious and relaxed in the freestyle -- the way we like to see him. The passage was moving forwards again, the piaffe was in a good rhythm, the transitions were good and the flying changes were in order. Only the walk was a problem, as he did not stretch his neck in the extended walk and did a leg yield from F to E instead of going straight. In the first extended trot there was barely an extension to be noticed. No new world record, but 83.000% was enough to build up a 6% advantage to silver medallist Hubertus Schmidt in the overall ranking.

"I made a bit of mistakes but he felt really good today. In the warm up I cantered him on the long rein to calm him down," Anky said. "I'm really happy with all the Dutch fans who were here and because I was riding a German horse, the Germans were cheering for me too." 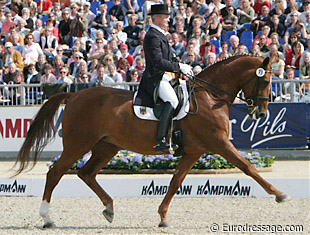 Hubertus Schmidt had big shoes to fill in Hagen with Ulla Salzgeber's Rusty retired from the show scene. Germany no longer had a star combination and the two German shooting stars, Martin Schaudt (Weltall VA) and Nadine Capellmann (Elvis VA), were not selected on the team.

Fortunately, Schmidt lived up to his reputation. Being the five time German Professional Dressage Rider Champion, he steered Martina Teichert's 12-year old Hanoverian mare Wansuela Suerte to two second places and one third. Wansuela is an average mover in her basic gaits, but she excels in the FEI movements, her correctness in performance and her overall harmony with the rider.

Wansuela Suerte (Warkant x Wachmann) was relaxed, cool, harmonious in every single movement. She looked tender behind in all her extended trots, but the piaffe passage was lovely, light and rhythmical. You don't get to see the electric spectacle of Salinero in Wansuela's gaits, but this horse is not nervous in her work nor is she sweating throughout the test. The judges did not seem to agree on her walk (which shows little overtrack). Some scored it 9, others gave 5. Schmidt made no major mistakes in any of the three tests and freewheeled his way to scores of 74.625% (Grand Prix), 75.720% (GP Special) and 80.525% (Kur). The silver was his. 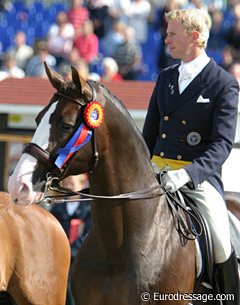 Though Wansuela's harmony is heart warming, Jan Brink and the Swedish stallion Bjorsells Briar are a more fascinating pair to watch. The 14-year old Briar (Magini x Krocket) has matured so much in his work this year and the liver chestnut really seems to feel good. If one is to judge quality of paces, Briar would be the silver medal horse, but a mistake in the two's in the Grand Prix and a major spook and blow up in the two's in the Special forced Brink to settle for individual bronze medal.

In the Kur to Music, Brink finished in second place, though, with 81.00% riding to a brand news freestyle which he practised only three times at home in Tullstorp, Sweden. Jan's new music is based on Helena Paparizous' Eurovision Song "Number One". "Briar was in top shape and we were so close to the silver," Brink said. "I'm so happy that I can put in a stable performance at such a high level. Briar has been doing the Grand Prix since he was eight and by now he has done approximately 150 Grand Prix tests. For the future, the new plan is to keep him at the top and motivated for the job. You need a happy horse to be able to present him at such a high level."