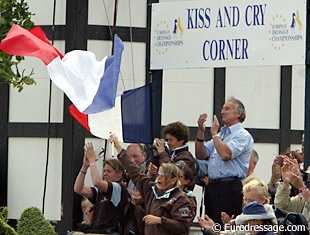 Here is a selection of scene shots from outside the competition ring. Get a glimpse of the atmosphere and action going on at the 2005 European Dressage Championships, held at Hof Kasselmann in Hagen, Germany.

Eurodressage's Prize for "Happiest Rider on the Scene" goes to the Polish Jaroslaw <Jarc> Wierchowzki. Jarc could not wipe off a smile from his face. His entire Grand Prix ride he was just beaming aboard his Thuringen gelding Wieland, who is a very interesting and talented Grand Prix horse. Jarc did not qualify for the Special, but he did not take his selection to compete at the Europeans for granted. Jarc trains at Dr Markowski's barn in Poland, and has worked in a Grand Prix stable in Belgium ten years ago. His son Piotr is an internationally successful junior rider.