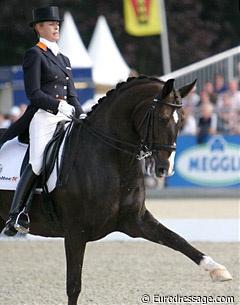 Anky van Grunsven and Salinero won the Grand Prix Special today with 76.160%. Salinero (by Salieri) was extremely hot to trot. Before entering the ring, the Hanoverian spooked from the camera and got wound up.

Anky was able to keep the lid on the cooker in the piaffe and passage tour, but in the canter her horse exploded and made mistakes in the two's.

Van Grunsven's riding talent prevailed and she was able to save the tempi's every single stride, but the entire canter tour was tension frought. In the walk, Salinero would not relax and stretch. Due to a brilliant piaffe-passage, Anky was able to keep her score high. "He was a little too fresh and really nervous in the ring," Anky said at the press conference. "He took off when the bell rang so it was not an easy ride for me. He's still an unbelievable horse; the piaffe-passage and the trot were really good. He still wanted to go."

Hubertus Schmidt and Wansuele Suerte remained to be the best German pair in the Grand Prix Special. With 75.720% they finished second. Schmidt did not push his mare too much in the extended trots, in which she shows irregular steps. The piaffe and passage were brilliant. Relaxed, rhythmical, at ease. The tempi changes and the final centerline passage-piaffe-passage were the highlights of the test. "The halt was not so good, but everything between the salute and the end was very good. She was fun to ride. Every step was under control," Schmidt commented. 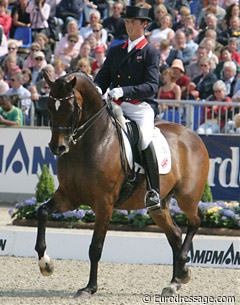 Carl Hester and Escapado are experiencing a real high this weekend with top class rides every day. In the Special he rode a personal best of 74.320% and placed third in this European Championship class. Escapado looked totally at easy in his work. He danced from piaffe to passage and only the tempi's could be more ground covering. Hester and Escapado became one in this Special and the judges rewarded this harmony with high marks. "It was a surprise for me to be in this position. He's a lovely horse to ride, very forward going," Hester said, adding "I'm happy to retire on what happened today."

Jan Brink and Bjorsells Briar are going for the bronze. In the Special they were well on their way for a place in the top three, but a mistake in the two tempi's due to a spook from the camera at C reduced his score to a 73.720% and fifth place in the Special 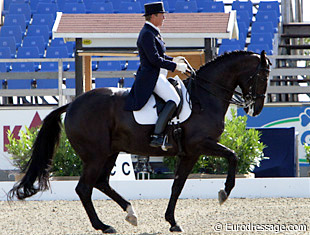 Kyra Kyrklund on the 10-year old Swedish warmblood gelding Max (Master x Alpenfurst), which she owns together with Yvette Conn. This horse has a lovely piaffe and an outstanding passage. Unfortunately, in the Special Kyrklund made a programme error, starting the trot half pass to the right too early on the long side. Kyrklund, who has been to more Olympic Games than any other dressage rider ever, joked about it afterwards. "Once you get over 50 and have Alzheimer, you are allowed to make one mistake."

Kyra's student Wayne Channon made his debut at an international championship. On his 12-year old KWPN stallion Lorenzo CH (Ferro x Wolfgang), Channon put in a 67.708% ride, placing 28th and just missing out on the Special. Lorenzo seemed intimitated by this huge championship ring and withheld himself in the trot tour, not showing his usual sparkle. But no worries, Channon and Lorenzo will have a chance to redeem themselves at the CHIO Aachen in four weeks, where they will be members of the British team again, together with Emma Hindle on Lancet and Fiona Bigwood on Mr G de Lully. 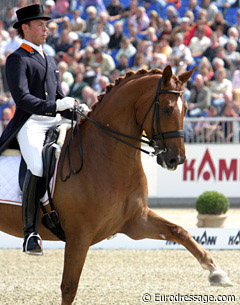 The most hyped pair from Holland this year is Laurens van Lieren and Hexagons Ollright. At CDI shows in The Netherlands, this combination was getting mid 70% marks in the Grand Prix and even 80% for his Queen freestyle. At the 2005 European Championships, the international panel of judges did not float him as much as in Holland, and Van Lieren had to work hard to get such high scores. The pair looked beautiful in the ring with divine trot extensions and a very relaxed, harmonious piaffe-passage tour. With Ollright being only 9 years old, there is plenty left in the tank to become a big star in the future.