Odile van Doorn Out, Constance Menard In on France Team for Hagen 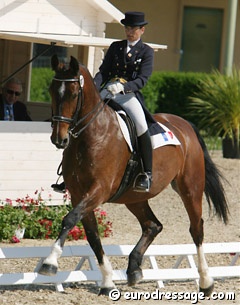 French Grand Prix rider Odile van Doorn has dropped out of the French team for the 2005 European Dressage Championships in Hagen, Germany, and reserve rider Constance Menard will fill in her position.

Van Doorn and her 13-year old Belgian warmblood mare Parodie van de Wateringshoeve (Donnerhall x Wendekreis) were not in excellent form last Saturday at a national show in France, and soon after the official message was sent out that van Doorn decided to drop out of the team.

The up and coming Constance Menard will be replacing Van Doorn and Parodie on the French team for Hagen. Aboard her Guelderland bred mare Lianca, Menard made her big international break through at the Sunshine tour CDI in March 2005 and also competed at the CDIO Saumur and CDI-W Lipica this season.

"I'm so happy. First, I felt so bad [not making it on the team], but now I'm bucking like a young horse," Constance told Eurodressage. "My horse was on holiday, so she's happy to be back in work."

The French team that will compete at the 2005 European Championships includes Dominique D'Esme, Karen Tebar, Hubert Perring and Constance Menard.