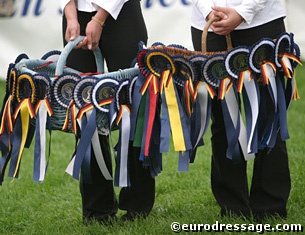 The die is cast! Hof Kasselmann in Hagen, Germany, will be the location of the 2005 European Dressage Championships, who will take place on the same dates as planned: July 27 - 31, 2005. Hof Kasselmann exclusively shared the news with Eurodressage.com.

The FEI Executive Board decided that Hagen had the most complete portofolio to take over the organisation of the 2005 European Championships from Russia, who failed to host to show as planned at the Bitsa Equestrian Center in Moscow, Russia, because of financial deficits.

"Hagen is the only one at this moment with a complete, written portofolio with an entire programme, side programme, financial budget and sponsoring in order," Mariette Withages told the KWPN office yesterday.

More news will follow later today and this week.