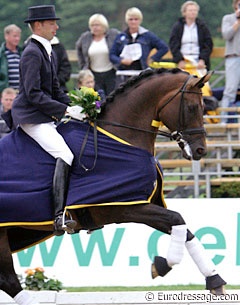 For those who witnessed the Westfalian stallion and his Dutch rider Hans Peter Minderhoud win the 2005 World Championships, phenomenon "Florencio" was still jaw dropping, awe inspiring and breath taking. The hype round Florencio may have flown away, but the stallion remains to be such an exciting dressage horse and breeding stallion, even this year!

Minderhoud reined Florencio to two undisputed victories in the six-year old division. In the qualifier on Friday, the pair won the class with a 9.38 total mark. With great excitement, everyone watched Florencio's test and one could hear a needle drop in the arena as all spectators held their breath watching this star prance through the ring. Florencio showed a bounce without compare in the trot. His collected and extended walk were outstanding and his canter was supple and uphill, although the second change was a bit high behind. Florencio does have a slight tendency to let the tip of his tongue hang out of his mouth. The judges awarded Florencio 9,60 for the trot, 9,70 for the canter and 9,00 for the walk. 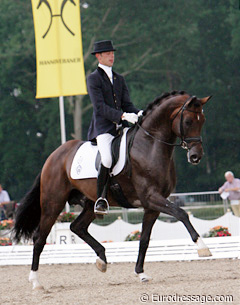 The new panel of judges in the Finals was even more complimentary of Florencio's qualities and gave the stallion a 10 for his canter, just like last year. Judge Dieter Plewa praised the horse for being a "gummiball [= rubber ball] in the trot, though the first medium trot was not entirely in rhythm. The canter is like one wants to see it, unbelievably elastic. The walk was well regulated and even." Minderhoud had a bit of difficulty with the walk pirouette which was a bit big and the flying changes in which the canter got unbalanced after the change. "That's because he has such a big canter," Plewa explained.

Albeit, there was no doubt about the fact that Florencio was by far the best 6-year old in Verden this year and with an 9.48 score in the Finals they took their second World Champions' title. Florencio is owned by Henk Nijhoff and the Dutch Bosch brothers.

His rider Hans Peter Minderhoud felt much confidence to reclaim the title this year prior to the show, well knowing that Florencio was indeed the best horse entered to compete in the 6-year old class. "I knew the selected horses in The Netherlands and knew that I could stay above the Dutch horses. I was also in Germany, where I won the qualifier," Minderhoud told Eurodressage. "Florencio is a horse of which there aren't many," he added. "On Friday he went really well. Today [Finals' day Sunday] I didn't have as good a feeling because he felt warm after 10 minutes. I had to motivate him a little more to keep him going. Normally he's a horse that really works for you," Minderhoud explained. 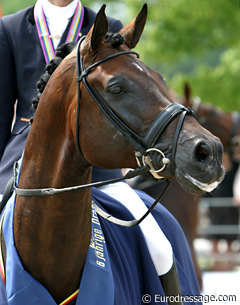 Florencio was extremely quiet during the award ceremony on Sunday and gave the impression of being fatigues. The sudden hot weather must have contributed to his general tiredness, while on Friday he was still bolting through the air during the victory galop. Minderhoud confessed giving Florencio a break after the World Championships. "The rest of the summer, he will just be breeding and be lightly ridden," Minderhoud said. "He will have to do the 3-week Stallion Performance Test in Ermelo for the KWPN, which means different riders will be riding him. Then in the winter he has to the KWPN/KNHS Stallion Competition and ride four Z-tests. Next year, we'll start training him for the Prix St Georges. I'm no longer doing any stallion shows with him. We want to keep him in one piece for the future," Minderhoud stated.

We can't wait to see Florencio in the FEI ring!