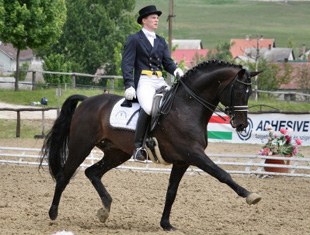 The Swiss Equestrian Federation named the four junior and young riders which have been selected to compete at the 2005 European Junior/Young Riders' Championships in Barzago, Italy, mid July.

Switzerland will not have a team competing, but two individual juniors -- Christine Ebert (on Ronja B) and Anna Widmer (Pik Lady R) -- and two invidual young riders -- Patricia Scharli (Conterno) and Andrina Sigrist (Willy the Kid) -- will be competing at the Championships.

Back to the 2005 European Junior/Young Riders Championship Index